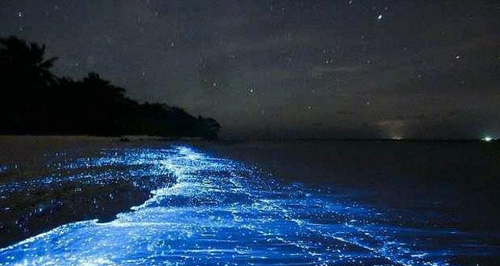 If you decided to get married here, your wedding photos would be magical!

Is there anything more romantic than lying on the beach, looking at the stars? Well, yes there is. How about skinny dipping in a magical, fluorescent sea in the caribbean...

You can do just that on Vaadhoo Island in the Maldives, where at night the water glows like a sea of stars.

Read more: The Weird And The Wonderful Home Remedies For Travel Sickness!

There are few places left in the world where bioluminescent phytoplankton are plentiful enough to create this light spectacle. As a defense mechanism, the phytoplankton glow blue when disturbed or agitated, creating a “#stellar” display on the shoreline at #night. #BioluminescentPhytoplankton in #VaadhooIsland, #Maldives

The island only has around 550 inhabitants and whilst in the daytime the beaches are a gorgeous tropical blue, as night the waves light up.

And it's all thanks to marine microorganisms called phytoplankton.

A photo posted by Universal Aspirations (@universalaspirations) onSep 1, 2016 at 6:31am PDT

This type of phytoplankton releases a blue luminescence as a kind of defence mechanism against predators when it's disturbed by oxygen.

Okay the science behind it is complicated but bear with us because the after effect is so worth it.

As the microorganisms float around in the sea, the movement in the water sends electrical impulses around a 'proton-filled compartment' inside them.

According to Metro, those pulses then turn the voltage-sensitive proton ion channels into flashing units. The pH in the phytoplankton's cells change, causing a series of chemical reactions which activate a protein called luciferase.

When it's mixed with oxygen, it's turns neon blue.

Are you still with us? If you are but you're totally confused, just remember it's all about swimming with the stars...

This is a real place. This isn't photoshopped or heavily edited. This is my hand in the water of Mosquito or "Bio" bay, the brightest bioluminescent bay in the world. There's a beautiful island off the east of Puerto Rico called Vieques, and this incredible light show draws people from all over the world. I just posted one of the very first videos of this place on YouTube. Until recently, cameras where not able to detect the phosphorescence of these creatures. Times have changed, and I'm lucky to be the first to visit. Video is on my channel. See my instagram profile for the link!

It's not just Vaadhoo Island where you can see this natural phenomenon. You can also see nature in action in Leucadia in California, Mosquito Bay in Puerto Rico and the Lakshadweep Islands in India.