Woman Who Fancied The Waterstones' Twitter Guy Ends Up MARRYING Her Crush! 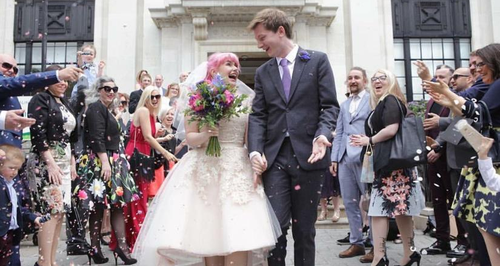 This might just be the most romantic story of the year so far.

Victoria O'Brien, a self-professed book lover, admitted that she had a crush on whoever was manning the Twitter account for the bookstore Waterstones in Oxford Street back in 2012.

In fact, her crush was so deep she even tweeted the company account to let them know.

well I'm in love with whoever is manning the @WstonesOxfordSt account. Be still my actual beating heart.

And when the Waterstones' social media guy replied to her, little did they know that it was the beginning of a beautiful romance!

@ameliesoleil Pff, he's not that dreamy in real life.

When she told her friend about the Twitter conversation, her friend challenge Victoria to get a date with the mysterious tweeter within two weeks.

Although she didn't make the deadline, she did bag herself a date with Jonathan O'Brien, within two months - and as Victoria put it herself: "Three years + one book later; married!"

@JillMansell @jeremyduns dared to get a date with the 'Oxford St guy' and two months later it worked! Three years + one book later; married!

And the story continues when she recently tweeted a photo of herself and her new husband Jonathan O'Brien on their wedding day, alongside her original tweet.

And if it couldn't get any more romantic, she announced the new with a Charlotte Bronte quote from Jane Eyre:

Jonathan, who is now a social media guru for Innocent smoothies, said: "It’s been very odd being on the other side of the story. It's weird going viral. A lot of people have got in touch, saying they’re dead happy for us and that it’s nice to see a lovely story. It seems to have snowballed a bit.”

The wedding day photo was taken by Nottingham-based photographer Emma Luna, who proudly tweeted after her photo went viral:

So this happened! #trending https://t.co/7SE3BFX7nf

Congratulations to the happy couple. What a modern day love story to tell the kids eh?