Any parent of a newborn will tell you there's not a lot of sleep to be had in the first week - but poor Prince William has a baby and two toddlers tiring him out.

But while he might have a lot of experience with babies, the sleepless nights don't appear to be getting any easier after he was filmed nodding off during an Anzac Day service at Westminster Abbey.

The Duke of Cambridge, 35, made the bleary eyed appearance at the service alongside brother Prince Harry, 32, and soon to be sister-in-law, Meghan Markle, 36, on Wednesday.

It wasn't long before cameras spotted the Royal struggling to keep his eyes open during the lengthy ceremony, which many believe could have been down to late nights with his newborn.

Two days after the birth of his third child, Prince William appeared to nod off at an Anzac Day service. pic.twitter.com/Ita7lf6wji

Wills told press that the tiny tot is "behaving himself" so far, adding that both him and mum Kate are doing well.

He added: "They are in good form, luckily. Sleeping's going reasonably well so far, so he's behaving himself which is good news."

Read more: Duchess of Cambridge and Prince William are set to call their baby this 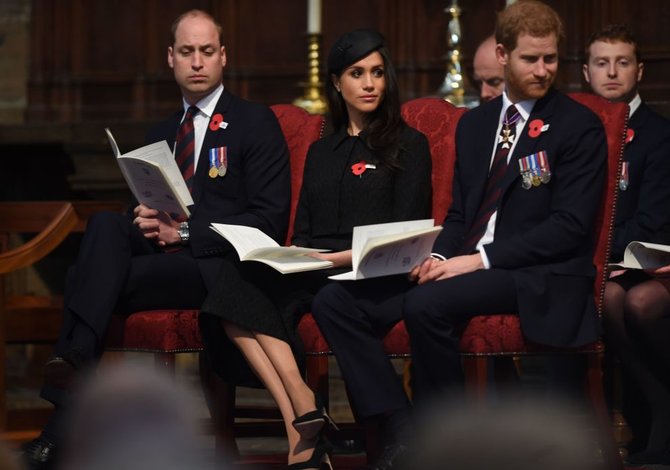 The couple - who are also parents to four-year-old Prince George and two-year-old Princess Charlotte - are yet to announce the name of their baby, but William did joke that "Jerry's a strong name" after he met the New Zealand High Commissioner to the UK, Sir Jerry Mateparae at the beginning of the service.

The Dean of Westminster suggested: "Jerry would like it to be Jerry."

To which the Prince replied: "Jerry's a strong name."

Kate, 36, was admitted to St. Mary's hospital in Paddington in the early hours of Monday and by 11am the new Prince had been born.

Shortly after the baby's birth, Kensington Palace confirmed in a statement: "Her Royal Highness The Duchess of Cambridge was safely delivered of a son at 11:01hrs.

"The Duke of Cambridge was present for the birth. Her Royal Highness and her child are both doing well.

"The Queen, The Duke of Edinburgh, The Prince of Wales, The Duchess of Cornwall, Prince Harry and members of both families have been informed and are delighted with the news."