It turns out there is a lot of preparation that goes into Queen Elizabeth II's outfits.

Whenever she attends royal engagements, you can be sure all eyes will be on The Queen and her bold fashion choices.

Not one to fade into the background, you’ll always catch Her Maj wearing brightly coloured coats and matching hats.

And it turns out there’s actually a very good reason the 93-year-old isn't a fan of bland colours.

According to the Queen’s biographer, Robert Hardman, she was once quoted as saying: "I can never wear beige because nobody will know who I am."

Read More: The Queen DOES watch The Crown, but one scene left her "upset and annoyed"

In his 2011 book ‘Our Queen’, he claimed that by wearing colour, she can instantly be recognised by members of the public and spotted in big crowds.

Some other sweet details about the Queen’s fashion choices have also been revealed in the past, with royal author Sali Hughes claiming she pays careful attention to which event she’s attending before choosing her dress.

In her 2019 book Our Rainbow Queen, Sali wrote: “She won't attend an engagement at a grassy venue, like a racecourse or garden party, in camouflaging green. But she will happily deploy green to stand out where it's needed."

What’s more, The Queen is also rarely seen without her leather gloves which she is said to wear for practical reasons.

As she is frequently required to shake hands with hundreds of people, the accessory helps to stop germs from spreading.

But it probably comes as no surprise that it takes A LOT of preparation to set the royal up with the perfect outfit.

Former footman Paul Burrell previously revealed in an interview on Yahoo's Royal Box that she’s presented with sketches of her outfits before getting dressed every morning - and she even has a whole floor of Buckingham Palace dedicated to her clothes. 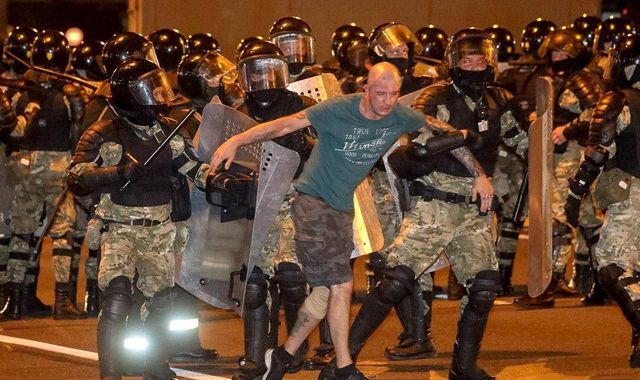 Thousands of people protest after Lukashenko 'landslide' in Belarus election