The Duchess of Cambridge must have been reminded of her own wedding when she arrived at St. George's Chapel today.

Kate looked sensational in a lemon yellow dress and matching hat when she attended her brother-in-law's wedding.

She arrived later than other guests she was ferrying along her eldest two, Prince George, 4, and Princess Charlotte, 2, who were amongst a gaggle of ten youngsters asked to be page boys and bridesmaids.

It was her first official outing since the birth of Prince Louis on April 23, and she looked ready to enjoy the day ahead. 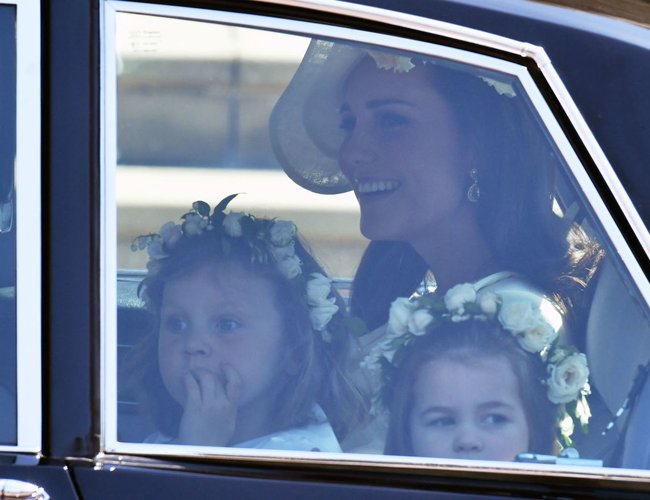 Kate came in a car with bridesmaids including Princess Charlotte (Image: Getty)

There was no sign of her 1-month-old son, who was left at home for the big event.

It was reported that Kate didn't want him to upstage the bride - and it's also a medical recommendation to keep infants indoors and away from large crowds until they are at least two months old.

Read more: Why Prince Charles is giving Meghan Markle away at her wedding to Prince Harry

Kate Middleton waves to the crowds as she arrives at the church (Image: Getty)

Kate wasn't the only well-dressed guest at St. Georges Chapel, which was packed with glamorous - and familiar faces.

There were scores of glamorous celebrities also filling the pews, including George and Amal Clooney, and David and Victoria Beckham.

Oprah Winfrey, Idris Elba and her castmates from US drama Suits were also seen filing in the church ahead of its 2 o'clock kick off.