The RSPCA is warning people not to 'approach or handle' the venomous spiders.

Two giant tarantulas are thought to be on the loose in Somercotes, Derbyshire, after three of their babies have been discovered in a carpark.

It is believed that a car knocked over some pots at the side of a carpark, which caused the arachnids to flee.

The tarantulas are some of the largest in the world - with a leg span of up to ten inches when fully grown. They are black in colour, but once mature develop pink-red hairs along their bodies - giving them a salmon pink look.

Originally from Brazil, they have a venomous bite, but tend to stun their prey by flicking hairs from their abdomen which can cause pain and blindness if thrown into the eyes.

They are hailed the Brazilian salmon pink bird-eating tarantula. 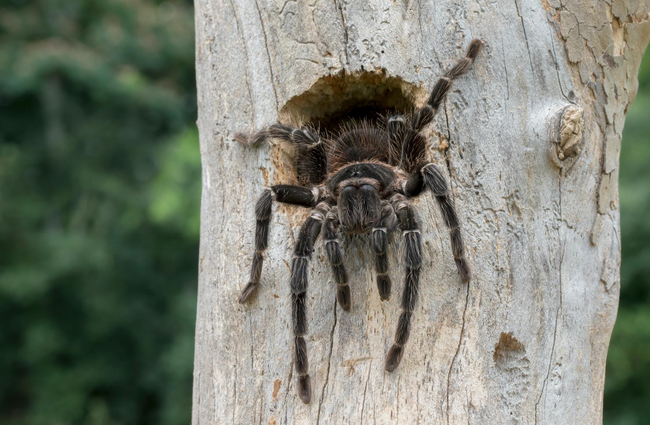 Credit: Getty - The Brazilian spiders are reportedly one of the three largest species in the world

RSPCA inspector Kristy Ludlam said: "The woman caller who contacted us was understandably shaken when she realised the pots contained spiders as she is terrified of them.

"It appears someone ran over two of the pots and the driver told the woman who called us he thought he saw two larger spiders.

"No bodies were found so it is assumed they may have escaped.

"We collected all the pots and took them to a specialist who found three baby arachnids in them which he believes are bird-eating spiders - in fact, when he opened one pot a spider ran up his arm."

The RSCPA, who believe the arachnids may have been abandoned, are keeping all the flowerpots warm as they predict that more eggs may be about to hatch.

The act of releasing spiders into the wild is actually illegal, under the Wildlife and Countryside Act 1981, as they are a non-native species.

Kirsty explained: "We are concerned that someone would abandon spiders like this.

"Tarantulas live in a warm and humid environment in the wild and need the same provided in captivity, to meet their needs and keep them healthy."

Any sightings of the elusive spiders are to be reported to the RSCPA, but the animal protection charity are urging people not to 'approach or handle' the venomous arachnids.

WATCH! Martin Lewis reveals how to save a fortune on medicines: