The 81-year-old, whose career spanned six decades, wrote shows including Kiss Of The Spider Woman, Ragtime, and Frankie And Johnny In The Clair De Lune.

A lung cancer survivor who lived with chronic inflammatory lung disease, he would have been considered to be at high risk from COVID-19, the disease caused by coronavirus.

His agent confirmed he died at Sarasota Memorial Hospital, Florida, on Tuesday.

Widely considered one of America's great playwrights, the openly gay writer put same-sex relationships under the microscope, with his witty plays and musicals delving into how people connect - or fail to.

McNally's 1975 work The Ritz was one of the first plays with unapologetic gay characters to reach a mainstream audience, while his 1991 play Lips Together, Teeth Apart was landmark in its portrayal of the AIDS crisis.

He told the LA Stage Times in 2013: "I like to work with people who are a lot more talented and smarter than me, who make fewer mistakes than I do, and who can call me out when I do something lazy. A lot of people stop learning in life, and that's their tragedy."

Accolades during his career include Tony Awards for his plays Love! Valour! Compassion! and Master Class, and the musicals Ragtime and Kiss of the Spider Woman.

He was elected into the American Academy of Arts And Letters in 2018.

Also the winner of an Emmy, McNally won a Tony lifetime achievement award in 2019, accepting his gong with the words: "The world needs artists more than ever to remind us what truth and beauty and kindness really are."

Stars of American theatre have paid tribute to McNally, with actor and writer Lin-Manuel Miranda calling him "a giant in our world, who straddled plays and musicals deftly."

James Corden tweeted: "He was an absolute gentleman and his commitment to the theatre was unwavering. He will be missed by so many of us."

Actor Conrad Ricamora describe McNally as "the most kind, brilliant person to work with".

Born in in St Petersburg in Florida, McNally grew up in Texas, and went on to study English at Columbia University.

One of his first breaks came just a year after graduating, when through a mutual contact at the Actors Studio, novelist John Steinbeck hired him to tutor his two teenage sons on a cruise around the world.

During the voyage, McNally wrote a draft play that would later go on to become part of his first Broadway production in 1965, And Things That Go Bump In The Night.

He also went on to write a musical adaptation of Steinbeck's novel East Of Eden, but the show was not a success and ran for just one night on Broadway in 1968.

His 1982 play Frankie And Johnny In The Clair De Lune - about a romance between a waitress and cook - was later adapted into a film starring Al Pacino and Michelle Pfeiffer.

He collaborated with legendary composer John Kander and lyricist Fred Ebb three times during his career.

McNally was not afraid to court controversy through his art, with his 1998 play Corpus Christi depicting a modern-day Jesus as a homosexual.

While The Manhattan Theater Club who first staged it were forced to cancel the production due to death threats, it went on to reopen and enjoy a successful run.

McNally thanked the theatre community for their support when picking up his fourth Tony Award later that year, saying: "You came together when I was in trouble. It was a time of oppression. You came together overnight. Our voices were heard, and we won. So this is for freedom. Thank you."

McNally also adapted several films for musical performance including The Full Monty, Spielberg's Catch Me If You Can and Anastasia.

He leaves behind his husband, theatre producer Thomas Kirdahy. 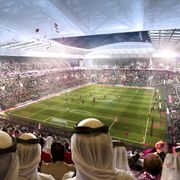 World Cup 2022 in Qatar: New bribe and corruption claims from US prosecutors