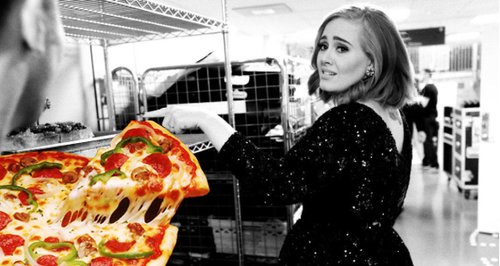 The 'Hello' singer is being accused of sending a poor hotel staffer on a trip of a lifetime. Here's the crazy story...

Adele is known for joking on stage and downing tea with James Corden, but she apparently had a MASSIVE diva moment at a posh hotel recently!

The 'Hello' and "Someone Like You' superstar singer reportedly asked staff at the Soho Farmhouse in Oxfordshire to deliver a pizza to her room. So far, so ordinary.

But when they offered to make Adele a pizza in their kitchens she said NO and asked for someone to drive to her fave takeaway shop in Kensington...70-miles away!

And the story gets even weirder because Adele reportedly ordered the snack at 11pm...so the pizza didn't even arrive until 3am and she was fast asleep in bed. The staff just had to leave the pizza outside her bedroom door.

Okay, so this sounds ridiculous, but considering Soho Farmhouse is a hotspot for celebs like Suki Waterhouse, David Cameron and Eddie Redmayne, we're guessing it's not the craziest request they've ever received.

What do you think of Adele's diva story? Is it real or a load of old junk (food)?

Supply crisis: Grant Shapps urges motorists to fill up only 'when they need to'