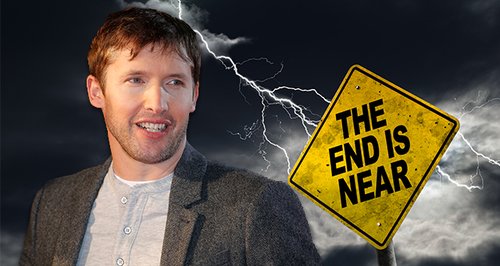 The 'You're Beautiful' singer sent a word of warning out to Twitter fans about next year after what has been a dreadful 2016!

James Blunt has had some stick recently over rumours that he's making new music, but you can't deny that his sense of humour is on top form after he posted this hilarious 'warning' for 2017...

Oh James! You're such a good sport.

And many of his fans (and some non fans!) agreed, giving him praise for his tongue in cheek approach to a new year and a new album!

@JamesBlunt you are the unexpectedly funniest man on Twitter

.@JamesBlunt Not a fan of your music, but you are so funny! I wish you the best for your new album in 2017. Are you covering East17 Stay?

Read More: These Are The Top 10 Things That Got Us Talking On Facebook In 2016

But this is by no means the first legendary Tweet the singer has posted, just check out some of these gems and you might fall in love with him enough that you head out and buy his album next year.

I never liked the sound of my own voice. Till it made me rich. @SamanthaMika: Does anyone else HATE james blunt's voice? I can't stand it.

Coming upstairs now. RT @sassyfalahee: omfg james blunt is on the tv downstairs can this day get any worse!

Now lets all immediately go and follow James Blunt on Twitter and see what magical moments he'll bring to our feeds in 2017!