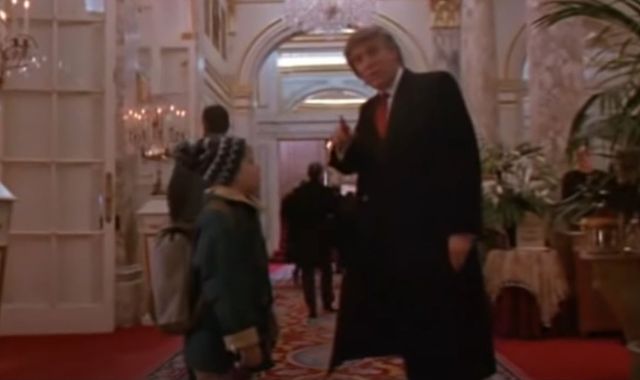 Donald Trump has come to his final days as US president - but if Kevin McCallister gets his way, that won't be the only role that ends for him.

Following Mr Trump's permanent ban from Twitter and other social media sites in the wake of the Capitol riots on 6 January, a number of internet memes suggested his cameo in Home Alone 2: Lost In New York should be cut.

Now, Macaulay Culkin, who played enterprising, burglar-thwarting youngster Kevin in the films, has backed calls for his removal.

The famous blink-and-you'll-miss-it scene sees Kevin asking Mr Trump for directions to the lobby in the New York Plaza Hotel, which the president owned at the time of filming for the 1992 sequel.

On Wednesday, the actor responded to two tweets about the cameo.

"Petition to digitally replace Trump in Home Alone 2 with 40-year-old Macaulay Culkin," said one, to which he simply replied: "Sold."

And to another Twitter user who digitally removed Mr Trump from the scene, making him invisible in a post liked by more than 100,000 people, Culkin responded: "Bravo."

In an interview marking the 30th anniversary of the original Home Alone film in November, the film's director Chris Columbus said Mr Trump had "bullied" his way into the cameo role.

"Like most locations in New York City, you just pay a fee and you are allowed to shoot in that location," he told Insider. "We approached The Plaza Hotel, which Trump owned at the time, because we wanted to shoot in the lobby. We couldn't rebuild The Plaza on a soundstage.

"Trump said okay. We paid the fee, but he also said, 'The only way you can use the Plaza is if I'm in the movie'. So we agreed to put him in the movie, and when we screened it for the first time the oddest thing happened: people cheered when Trump showed up on screen.

"So I said to my editor, 'Leave him in the movie. It's a moment for the audience'. But he did bully his way into the movie."

In December 2019, Canada's national broadcaster CBC aired the film with the cameo deleted in a move that Donald Trump Jr described as "pathetic".

However, a CBC spokesman denied the decision was politically motivated, saying eight minutes had been removed from the film to shorten it and "the scene with Donald Trump was one of several that were cut from the movie as none of them were integral to the plot".

A Home Alone remake by Disney is currently in the works.