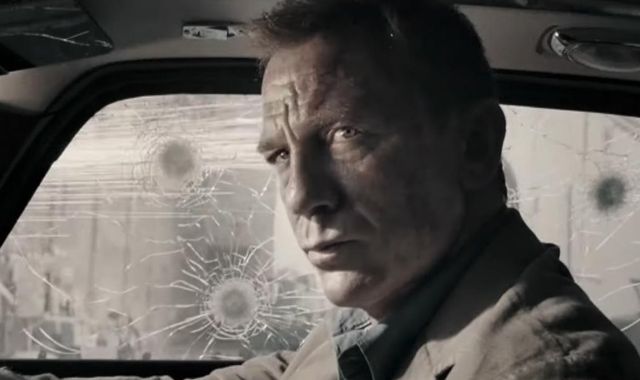 The Sky News entertainment team managed to bag tickets to the world premiere of No Time To Die, at the Royal Albert Hall. Here's their reaction to the most-anticipated film release in years.

Much has been made of the secrecy shrouding Bond 25.

Despite being pushed back because of the pandemic and heavily promoted, no one had actually seen the film until last night, leading to speculation over what it might be hiding.

It's safe to say having seen the film it's clear why producers decided not to let journalists see it before the press tour, keeping questions more generally to the franchise and not the specifics of what goes on: No Time To Die is a genre-bending Bond.

It kicks off with horror, we skip through romance (of course), action (of course) and even some family drama while the franchise's first American director, Cary Fukunaga, brings an artiness to the cinematography that neatly distracts the audience from trying to figure out what the thing everyone is fighting over actually does.

And in a post-pandemic world, a weapon spread by touch feels all too prescient (though this was of course written before the coronavirus outbreak) and there are moments that may remind viewers that sadly we all too well understand things like exponential spread these days.

The film is chock-full of tech, explosions, guns, and car chases.

In fact, some of the scenes feel slightly gratuitous, with Daniel Craig getting one last opportunity to do pretty much everything you could ever expect from Bond.

Fans will be pleased that all the classic lines are delivered, sometimes with such humour that you can't help but suspect they were improved by Phoebe Waller-Bridge's pass at the script.

The film promised to view women through a more modern lens and Lashana Lynch is a brilliant addition, playing the antithesis to Craig's 007, and treading a line between newbie and a necessary part of the action.

Lea Seydoux returns as Madeleine Swann - the first of Bond's love interests to ever get an invite back to the franchise - but let's just say the relationship isn't going swimmingly; and while Ana De Arnas doesn't have a huge part, she's very welcome when she is on screen, leaving you hoping she may return at some point.

But what of Bond's legacy? What does No Time To Die tell us about the future of the franchise?

Well, of course we know Craig won't be back, and the film makes no apologies for giving him a send-off which is almost reverential.

But there are certainly doors left open for some characters, and without Daniel Craig around to kick through them, we may see Bond taking a very different shape in the future.

Before the opening credits even roll Cary Fukunaga sets the pace of what's to come. The action is relentless, and it's easy to tell why it's so long - Fukunaga lets action scenes run and run, but it's impossible to say how you would cut them down.

Bond's asides smack of Phoebe Waller-Bridge and simple scenes, such as Hugh Dennis's rather random casting, have you smirking.

Lashana Lynch's character is a strong match for Bond on screen, delivering a cat and mouse start to the film which hooks you in. She also makes you think how a female 007 could take the franchise forward.

Rami Malek is spectacular - incredibly dark and just absorbing to watch - and Bond punches his way through an enjoyable last farewell.

It's well worth the wait.

I had three reservations about this film.

Firstly, would it feel old-fashioned, especially after 18 months of delays due to COVID-19 - released to a post-pandemic world?

Secondly; would the character - so synonymous with womanising - ever really be able to do enough to catch up with society - especially post MeToo - and engage a younger more female audience?

And thirdly - perhaps my biggest concern - at a whopping two hours and 43 minutes long, would I be able to stay awake?

I've been won over on all counts.

The most striking thing for me - the film opens and ends with scenes dominated not just by females, but the narratives of young girls. A hint to a progressive tone and perhaps a new beginning for the franchise.

The opening words "you eat because you are depressed", with some lingering shots through a house in the middle of nowhere, a mother drunk on the sofa, her young daughter doing all she can to survive the horror that unfolds, reminds instantly of Killing Eve - no doubting Phoebe Waller-Bridge's fingerprints here.

It feels blissfully ignorant of reality, and its escapism is most welcome, but it's more complex characters and storyline of bioweapons that infect and kill on touch demand it is taken more seriously than its predecessors - although I'm glad a few of the traditional Bond tropes (and jokes) remain.

Spectacularly well shot, wonderfully dark villains (Rami Malek's performance is faultless) and perhaps more depth than before, perhaps Bond really can to save the day - for cinema in the short term at least.

Subscribe to the Backstage podcast on Apple Podcasts, Google Podcasts or Spotify.

(c) Sky News 2021: No Time To Die review: 'Genre-bending' Bond film is 'relentless' but worth the wait