Simon Cowell WON'T Be Signing X Factor Winner Matt Terry And This Is Why... 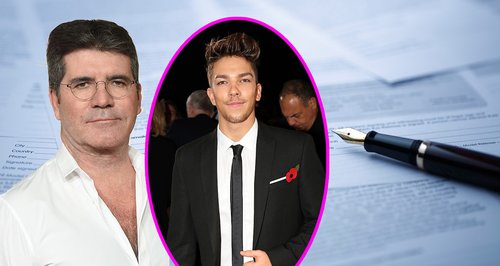 It turns out Matt has been told NOT to follow in the footsteps of Little Mix and James Arthur...

Every year, the winner of The X Factor signs a lucrative deal with Simon Cowell's record label SyCo... but not this year!

Rumour has it that 2016 winner Matt Terry WON'T be working with Simon Cowell in the future and has instead inked a deal with competitor Sony.

Although in another turn up for the books Simon Cowell is happy about this!

So, what on earth is going on?

Well, reports in The Sun say that Simon is convinced Matt could be the next Olly Murs. Because of this he wants him to have the best possible shot at success by signing with Olly's label, Sony.

We've always known Simon is a clever man, so maybe this is for the best?

Matt's winner's single, When Christmas Comes Around, which was written by none-other than Ed Sheeran, is storming in the charts so there's certainly no need to worry that Matt's going to be a short term flop.

Read more: Honey G Performs Her OWN Song On X Factor Finals Despite Being Booted Out!

But what about his long-term career? Will he go the way of Little Mix and James Arthur... or Steve Brookstein. Let's hope not!

Matt's got a little bit of competition from another X Factor alum for Christmas number one though. Louis Tomlinson released his debut solo track, Just Hold On, and it is climbing the charts too.

Who do you think will take the top spot?

Watch Matt talk about THAT 'kiss' with fellow X Factor star Freddie Parker in our exclusive interview below...

Are you a Matt Terry super fan? Let us know in the comments below...