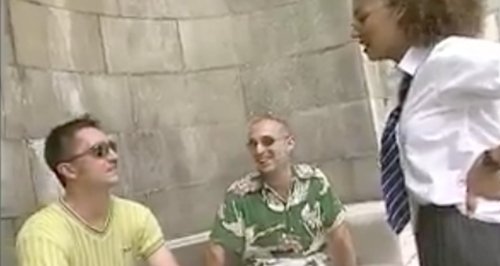 This behind the scenes footage will make you scream GIRL POWER!

We all know that the Spice Girls kick butt, after all they invented girl power!

But this previously unseen footage that has emerged on Twitter will make you want to stand up and applaud them.

In the clip, taken during the filming of an ad for camera company Polaroid, we see an angry looking Mel B storm over to the director before Geri and Victoria join her.

They're riled up because the director has asked the girls to have their "cleavage showing and midriff showing" during filming.

The Spice Girls dragging the makers of the Polaroid ad they were appearing in for trying to make them show their cleavage and midriff. pic.twitter.com/UBAvqIJ5Gq

Mel B pulls him up on this and the director, complete with sunglasses on says carelessly "it's every man's fantasy".

This understandably gets the girls even more angry and there are a few profanities from the star that have had to be bleeped out...LOL!

Read More: How And Where Can You Get Spice Girls Reunion Tickets? Here's EVERYTHING You Need To Know

Geri then charges in labelling the unfazed director a "chauvinistic pig" and Victoria HILARIOUSLY shouts "it's not sunny stop trying to look cool" before pulling off his sunglasses.

That will teach him! Long live the Spice Girls...

Coronavirus warning: Travellers from lockdown zones in Italy must self-isolate