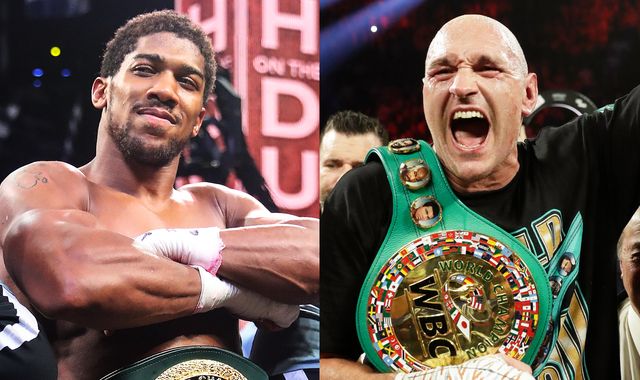 Anthony Joshua has been urged to allow Tyson Fury and Oleksandr Usyk to decide the undisputed heavyweight championship by promoter Frank Warren.

Undefeated duo Fury and Usyk hold every major belt in the division after their exceptional wins over Deontay Wilder and Joshua but a clash between them, to decide the rightful No 1, is highly unlikely within the next year.

Joshua has triggered a rematch clause to again fight Usyk, expected in spring 2022, to regain the IBF, WBA and WBO belts.

"He shouldn't be going through with it," WBC champion Fury's UK-based promoter Warren told Sky Sports about Joshua.

"If he knocks it on the head, it opens the door for us to do the unification [Fury vs Usyk].

"Let AJ get a warm-up fight. He needs a winning mentality before he goes into [a rematch with Usyk].

"Maybe he fights the winner [of Fury vs Usyk] which is still a big fight."

Warren said about Fury vs Usyk: "They have similar skills. Tyson wouldn't fight him like AJ did. Tyson would use his physical attributes, his size and reach, and would win the fight."

Joshua and Fury came close to agreeing an undisputed title fight until talks dramatically broke down earlier this year.

Fury vs Usyk is now the dream fight for the division, Warren believes.

"Absolutely but it can't happen because they've made a rematch with AJ," Warren said.

"I think Usyk will beat him again.

"If there had been another 20 seconds, Usyk would have stopped AJ.

"He wobbled him early and nearly took him out. Next time around he will fancy knocking AJ over.

"The only way AJ can beat him is to do what Wilder did - to impose himself.

Usyk's promoter Alexander Krassyuk previously told Sky Sports of their plan to face Fury: "It will be after Usyk defeats AJ in the rematch.

Asked if Usyk was impressed by how Fury beat Wilder, Krassyuk said: "He was. And he was impressed with how the boxers fought without showing boxing skills. They were trying to [badly hurt] each other."

Dillian Whyte has advised Joshua: "The only thing he needs to change is his mindset.

"Forget trying to please people and impress people. You're not going to out-box him.

"You are a big, strong guy. Take the fight to Usyk!"

Whyte will be established as the WBC mandatory challenger to Fury's belt if he beats Otto Wallin on October 30.

Warren said: "If Whyte gets beaten by Wallin, which could happen, they will rematch. It could be another mess."

Whyte had said: "Hopefully now the WBC forces my position and Fury has no choice.

"It's a massive British fight, a major fight for Britain."

Fury's last five fights have been in America and Warren said about a homecoming fight in the UK: "I would love that to happen but it will be his choice."

Sky Sports' Carl Froch had speculated that Fury could choose to retire after coming through his classic rivalry with Wilder.

"If he wants to, he could," Warren said. "But he loves boxing. He doesn't think about that.

"He will make a decision about what he wants to do because he's in the driving seat.

"If he fights on, it will be against who he chooses to fight.

"He will choose who he gets in the ring with because he's the guy. He's the best heavyweight of his generation.

"He went to Germany to beat Wladimir Klitschko who was, at the time, the heavyweight of his generation. He boxed his ears off to show one facet of him.

"He goes to America three times in [Wilder's] back yard and beats the hardest puncher out there.

"I can't think of any British fighter who has done that.

"In four of those fights he was the underdog. He was written off against Klitschko and against Wilder in their first and second fights.