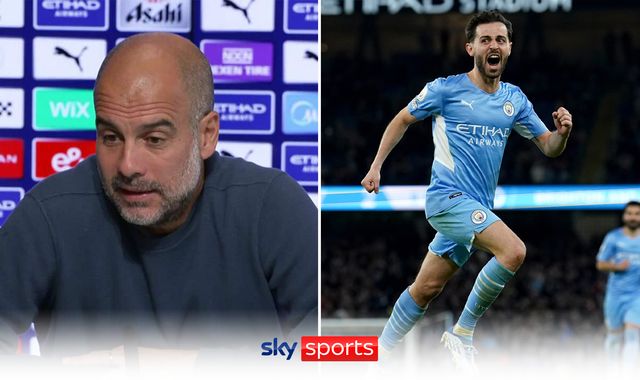 Pep Guardiola insists he wants Bernardo Silva to stay at Manchester City but concedes the decision is out of his control amid interest from Barcelona.

Speculation has resurfaced this summer and Guardiola admits he is in the dark about Silva potentially following Raheem Sterling, Gabriel Jesus and Oleksandr Zinchenko out of the door at the Etihad Stadium.

"I was comfortable working with Oleks [Zinchenko], Gabriel [Jesus] and Raheem [Sterling] for three incredible years, with incredible characters that helped us achieve," the City boss said.

"I've said many times the desire of the player is the most important thing; I want people happy here trying to do it together. Of course I would love for Bernardo to continue here, he is a special player in the dressing room for me, but I don't know what is going to happen. Honestly, I don't know.

"What is going to happen will happen and if he stays it's perfect, and if he has to leave it's because football is like this, the clubs have an agreement, the player has desires, and I am not the person to stop the desire of people.

"When you are a football player it's short, you don't realise it, immediately it's over. I don't want to stop the desire of a player but, at the same time, I'm just a little part of the club, you have to talk to the club, I have never ever been involved in that, and what the club decides for me is OK."

Guardiola reaffirmed his stance on Silva's future when pressed on his uncertain response, adding: "I want the best for the players, but I want Bernardo to stay, definitely, 100 per cent, I want him to stay here.

"But, at the same time, if you want to leave and have an offer and the clubs have an agreement, it's common sense what I said, it's nothing special, this is the reality.

"He's an important player for me, Bernardo is special. I don't know what is going to happen. As far as Manchester City know, we didn't get any offer, last season either, this is what I can say. Bernardo is ready, he's training really well, he's ready for Sunday and that's all."

City open their title defence away at West Ham on Super Sunday - live on Sky Sports Premier League - but have yet to bring in a replacement for left-back Zinchenko, who joined Arsenal this summer.

Chelsea look set to beat the champions to the signing of Brighton defender Marc Cucurella, and Guardiola was unable to provide an update on City's pursuit of alternative defensive targets.

"Nothing special," he added. "It is the same. We will see. We still have lots of days until the end of the month. We will see.

"There are a lot of players all around the world and a lot of them can fit in perfectly the way we are as a team, but at the same time transfers are always difficult.

"Selling is more difficult than buying at the same time. Sometimes it works, sometimes it doesn't. It can be possible, it cannot be possible."

Who will be on the move this summer before the transfer window closes at 11pm on September 1?

Keep up-to-date with all the latest transfer news and rumours in our dedicated Transfer Centre blog on Sky Sports' digital platforms. You can also catch up with the ins, outs and analysis on Sky Sports News.