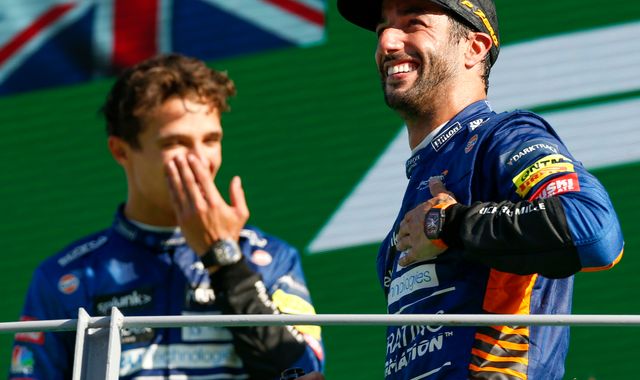 Daniel Ricciardo says he "never lost faith" in his ability despite his three-year victory drought and challenging debut season with McLaren, as the Australian reflects on a remarkable Italian GP victory and explains the "reset" that helped him regain some form of old.

Ricciardo has been on a midfield journey since leaving Red Bull in 2018 as he, to the surprise of the paddock, joined Renault and then McLaren - but put an end to two long waits on one chaotic Sunday at Monza, returning to the top of the podium, while also claiming his team's first win in nine years.

The result came amid a difficult season for Ricciardo, who has struggled to get to grips with the McLaren car and has been overshadowed by young team-mate Lando Norris.

"It's been the most challenging year I've had in a long time," Ricciardo, now an eight-time Grand Prix winner, admitted to Sky Sports F1.

"But it's also made me understand more about myself as a person, and as a competitor. How much it still means to me, how much I want it.

"The weekend was a bit of a product of that. Already on Friday night I had a chip on my shoulder. But this is crazy, to be the guy that gets the first win for the team in nine years is pretty special."

Ricciardo added that "there have been lows this year but deep down I never lost faith or the belief" as he comes to terms with his momentous achievement.

"You can easily get lost," he said. "You know, deep down I would have moments of frustration or moments of, yeah, dropping my head, but I kind of made a point never to let that last. I also made a point to try and gain something from it and learn from it.

"For a moment you fall out of love with the sport but actually the clarity you get afterwards it kind of makes you realise how much you do love it and how much you want it. I would back myself to the hilt."

Ricciardo credited a summer "reset" with inspiring some form. "First half of the year I was trying to play catch-up and learn about the car, so I was always in, in, in," he said. "The August break kind of forced me to get away from it. I spent it in the States and I just got away. I spent time in nature, at a friend's ranch, and it was just the time I needed to just reset.

"I truly think that helped this weekend get to this position."

He also admitted to a "pinch me moment" of winning for McLaren.

"I'm sorry if I sound a bit self-absorbed now but when I think of McLaren I think of (Ayrton) Senna. That's the early memories and I've seen you know, like the trophies in the cabinet at the MTC and to have a winning trophy now with my name in pretty much the same cabinet is crazy," he said.

McLaren, meanwhile, are more than happy with their decision to bring Ricciardo on board.

"As we know, Lando has had a sensational season so far," team boss Andreas Seidl told Sky F1. "Daniel struggled with integration, getting used to our car in the beginning.

"But there's a reason why we wanted to get him on board - because he's a proven racer and he's one of the best in our sport. It's great to see after the break that it's coming."

The season continues on September 26 with the Russian GP, live on Sky Sports F1.