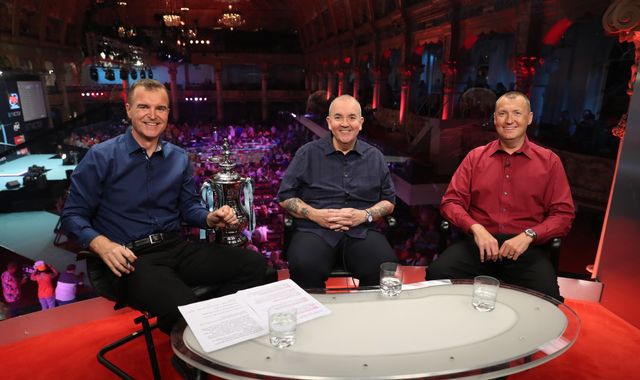 I am used to listening to Clarky, he is always there.

Even going on stage, sometimes it can be a bit manic, but I would say to Webby and Party 'if Clarky goes on stage, follow him.'

He is my comfort blanket, if I see him stand up and make his way to a step I am right behind him.

That's because we are a team and he was the leader, so we follow him.

Clarky will be missed by everyone. It won't just be his fellow workers; it will be those that watched him all of the time as well.

It was a blow. He phoned me a couple of days ago, he said that he had some news for me and then that he was retiring.

I said that I got it and that I got that he would want to retire… then he said with immediate effect. That knocked me!

We both got a little emotional on the phone, but I told him that he needed to do what he had to do. I know that the stress has been kind of telling on him, before the live broadcasts.

He's said a couple of times, 'hopefully my meds kick in and if they don't, we'll be alright, won't we?'

We get on away from the darts, we spend a lot of time in hotel bars together and I've never known anyone else to lead and present with Sky Sports Darts, I don't know anything else… I just know that Clarky will always be there!

Every now and again someone else steps in and they do a great job, but Clarky was, in my opinion, Mr Darts. I liked his manner and the way that he went about things.

We hear so often about so-and-so being so professional… Clarky was professional. Clarky was so professional. He would always be there early to make sure that he was ready, he would know stats and he would just say is it right that they've played 82 times [Taylor and Barney]. He wasn't ever a 'guesser', you can't be. He never said that he thought someone did X or Y, he knew.

I admire him because it was a sport that he grew to love, he started off in boxing and then grew to love darts. He's got a passion for it.

There was one time when we were on the way to the World Cup in Hamburg and the flight was delayed. It was just myself and Clarky at the airport, T5, and he asked me if I wanted a Guinness.

I said not really because it was a bit early! It was 11.30am and he said that we'd have one because the flight was delayed by an hour.

Anyway… we had one, two. I said that we had to make the flight and I was feeling a bit worse for wear…

When I say that I hadn't eaten, I'd probably eaten a lot, but it didn't feel like a lot. I went to check the board for the gate, and it said that there was another hour delay. He said that we'd have a few more Guinness!!

We both got on the plane, we felt drunk, but we probably weren't acting that drunk! I said we need to be allowed on this flight. We were sitting there, Clarky gets off and we all get off at the other end and Clarky said that he'd left all of his clothes behind!

That night, they were all in the bar and I was in my room as sick as a dog! The following morning, Clarky bounced up asking if I was alright!

Don't get on the drink with Clarky! There are just so many little things that we admired about him.

Obviously with Parkinson's, it's a huge thing. The way that we know that he dealt with it, we saw him just plough on like a machine. I will not forget the time that we did the Coast to Coast walk.

He said that it was a walk. It wasn't - it was a mountain hike! It was 2000m up and then down again, every day. I was struggling at points and I was only there for three days.

I watched him plough on at his pace saying to me that we'd get it done and that we'd do it. At that point, I was thinking just how much of a special human being he is.

I just wish him so well in retirement. He's not going to laze around, is he? We don't want him to sit down, we want him to be as mobile as he can possibly be.

He has said that he wants to spend time with his boys and wife. I just wish him well; I mean that from the bottom of my heart. He's a hell of a man, what a presenter. He's professional, polite, you name it. Every good thing about a human being, he was all of it.