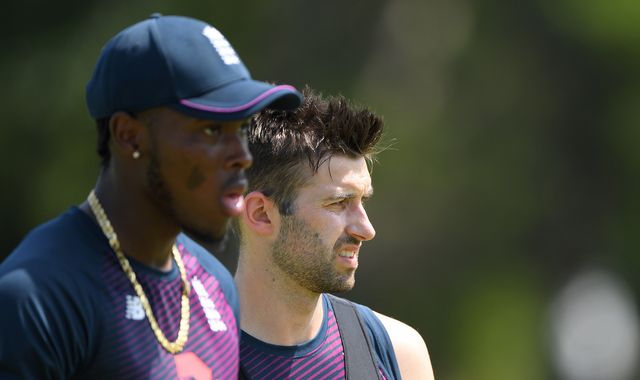 Archer and Wood, the two fastest bowlers in England's bowling pack, were paired together for the first time in Test cricket at the Ageas Bowl as the home side lost by four wickets.

But Gough, who amassed 229 wickets during his nine-year Test career, believes Wood - along with James Anderson - should sit out the second match of the series, which begins at Old Trafford on Thursday, live on Sky Sports Cricket.

Speaking on the latest episode of The Cricket Debate - which you can hear as a podcast in the player below - Gough predicted recalls for Stuart Broad and Chris Woakes, who were both left out for the first Test.

"I think Broad's coming back in," said Gough. "I would rest Wood and Anderson at Old Trafford and bring in Broad and Woakes.

"That would be my plan then, with back-to-back Test matches, you bring Anderson and Wood back [for the third Test]. I've said from the start - rotate Archer and Wood.

"We got a bit carried away, seeing Wood bowl really quickly in South Africa. We've seen Archer do it, but it's very hard to do it every single game.

"Broad, Woakes and Anderson are the reliable three, while Archer and Wood will blow away the opposition on their day.

"Pick the right player, for the right conditions and don't get too funky with selection. Stick to the plan and England will come back in this Test series."

The Yorkshireman also expects England to make changes to their batting line-up at Old Trafford, with Joe Denly widely tipped to make way for the return of skipper Joe Root from paternity leave.

However, he also feels wicketkeeper Jos Buttler's place could be under threat after some unconvincing performances behind the stumps and a run of low scores with the bat.

Buttler has not reached 50 in his last 12 Test innings and also spilled a leg-side chance to dismiss Jermaine Blackwood - who went on to score 95 as West Indies chased down their target of 200 at the Ageas Bowl.

"Buttler has got two Test matches to save his career, for me," added Gough. "He's a terrific talent, lots of kids look up to him and he has all the shots.

"But, in Test cricket, you can't just keep getting out and that's what he keeps doing.

"The Denly selection - I think he's been a lucky boy to play the Tests he has played. I love him as a bloke, I think he's a terrific guy.

"But if you consider that since 2000, 47 batsmen have played for England - there's only three with worse averages to have played 15 Tests.

"That's Malan, Compton and Jennings - and they've all got hundreds. Denly hasn't got a hundred, so it's time to make a change."

Watch day one of the second #raisethebat Test live on Sky Sports Cricket and Sky Sports Main Event from 10.30am on Thursday.