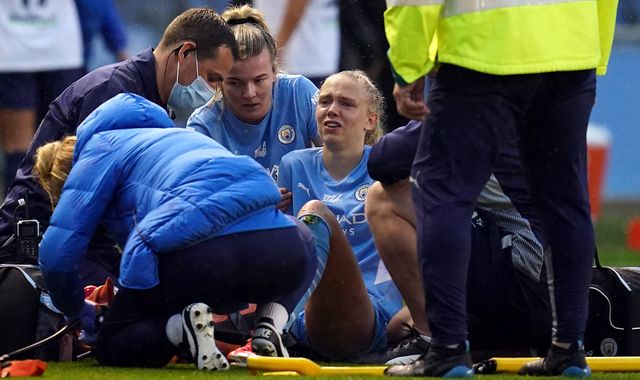 Esme Morgan suffered a broken leg against Tottenham on Sunday and will undergo surgery, Manchester City have confirmed.

The 20-year-old was carried off on a stretcher after being injured in a collision with Ashleigh Neville early on in City's 2-1 defeat to Spurs at the Academy Stadium.

The Football Association had already confirmed on Monday Morgan had withdrawn from England's squad for their World Cup qualifiers against North Macedonia and Luxembourg.

And City said on Wednesday that she was "set for a spell on the sidelines after suffering a lower leg fracture" before adding: "The defender will shortly undergo surgery on her right leg before beginning a period of rehabilitation with the club.

"Everyone at City wishes Esme all the best in her recovery and will give last her all the support she requires."

Morgan was making her second appearance of the new Women's Super League season, having also impressed in the Champions League second-round knockout by Real Madrid.

She is a product of City's academy and has made 46 senior appearances, scoring once, while she is yet to be capped at full international level after playing for the U21s.

Manchester City and England captain Steph Houghton said on Tuesday: "We all checked on her at half-time, and obviously after the game, and we've been keeping in touch via message just to see how she is.

"She is for sure going to be an England international. She is so dedicated, she's so fit, she loves playing football, and she's so intelligent. For me, I love playing next to her as my right-back and she's done a great job over these last three or four games, and she's got an unbelievable future ahead of her.

"Hopefully this injury isn't too bad and she'll be back on the grass again."