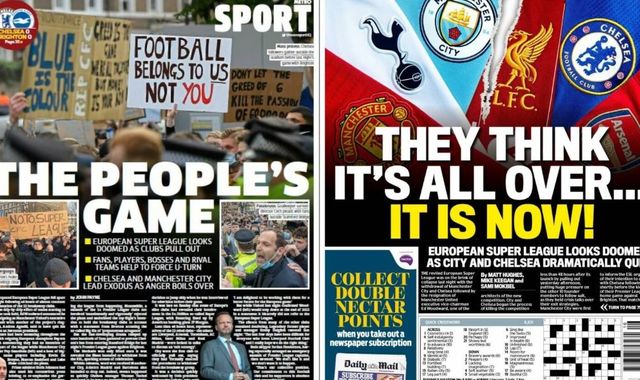 Rounding up the reaction of Britain's national newspapers with the proposed breakaway European Super League on the brink of collapse after all six of the Premier League sides that agreed to join reversed their decision.

Under a front-page headline of 'The People's Game', Metro's John Payne writes: 'The proposed European Super League fell apart last night following 48 hours of almost constant condemnation of the 12 breakaway clubs. With the Premier League's biggest clubs no longer involved in the Super League, there appears to be no future for the short-lived competition, though there could still be more twists and turns with Real Madrid chief Florentino Perez likely to try and cling onto his brainchild.'

In The Times, Henry Winter writes: 'Let us all warm to the bonfire of the vanities last night, the blaze claiming the reputations of the arrogant: first one club owner, then two, then like duplicitous tumbling dice, all six of the Premier League charlatans surrendered. The Super League cartel was engulfed in carnage.

'The fight against bad or misguided owners is far from over. But there is hope. We all knew the menace seeping into the boardrooms. Now the resistance movement is ready.'

In The Daily Mail, Martin Samuel strikes a note of caution, beginning: 'You won. We won. All of us. Gary Neville, Jamie Carragher, every manager who spoke out, every player who took a stand. The fans outside Stamford Bridge. The Chelsea Pitch Owners. Those who took their banners down from The Kop. Those who rejected preciously rare tickets for Sunday's cup final. Even the helpfully populist PM and his government. We won. Victory is ours.'

But he adds: 'Yet the struggle does not end here. Having revealed their endgame so nakedly, it must be ensured this can never happen again. Legally binding articles of association for every club, each starting with a simple message: that they play in Football Association and UEFA sanctioned competitions only, and nothing beyond. Make it watertight, make it binding. Make it so that these threats can never be voiced again.

'Now, we must drive these plans into the sea.'

In Barney Ronay's column for The Guardian, he writes: 'There will be rejoicing in the short term. Rightly so: we have had a glimpse here into the darkness on the other side, the world that lies at the final extension, not that far down our current path, of what football has allowed itself to become. It is a chilling little tableau.

'... It has been heartening to feel energy, the sense of ownership, of community roused by this sudden presentation of the facts of where we are. But make no mistake this is simply a retreat, a moment of ceasefire, a phony peace.

'...But the concerns of those involved must also be heard. Your enemy's enemy is not always your friend - and the clubs are also right in this: football's governing bodies are self-serving and opaque. Reform is absolutely vital: better it comes from below than in this form again.

'Beyond this, the rage, unity and galvanising power of the last few days speak to things way beyond football, to the alienation many people have felt long before the pandemic. Football is only ever a weather vane in these things. These conspirators still control the field. But as the ESL recedes and regroups, the battle if not the war appears to be turning.'

In The Sun, Martin Lipton chronicles football's 'longest day... a battle for the soul of the game that ended with the bodies of the victims strewn over the Prem's boardroom tables.

'With Tottenham chairman Daniel Levy savaged by the left-behind gang, metaphorical blood weeping from the wounds inflicted by the Angry Brigade, who were not soothed by his messages of contrition.

'This is a victory for the good guys. For the fans who said enough was enough. The players, managers and pundits who voiced their utter disapproval.

'The clubs who backed away from the whole shooting match. Even the FA, Prem and Government who, for once, stood firm and resisted, rather than caving under the first breath of pressure.'

In The Daily Telegraph, Chief Football Writer Sam Wallace reflects the mood at the end of an 'extraordinary day, leaving the sport more divided than ever - but still intact...

'Some of the most powerful clubs in the European game, and some of its wealthiest owners had suffered the most astounding humiliation in sporting history.

'This had been a furious three-day reckoning and the once secret plans of this wealthy elite of venture capitalists and fossil fuel billionaires, of career football politicians like the old man in charge at the Bernabeu were over. The limits of their power had been exposed. The people had spoken.'

He ends by calling for ramifications: 'The six rebel clubs cannot be allowed to come back into the fold without punishment for breaking Rule L9 that prohibits members from entering unsanctioned competitions. But the executives noted that punishment of players and managers would be unfair on individuals who had played no part in the plotting.

'Any punishment would target specifically those who had knowledge and complicity. How many of them may offer themselves up for sanctions is another question.'

And how the condemnation continued on social media...