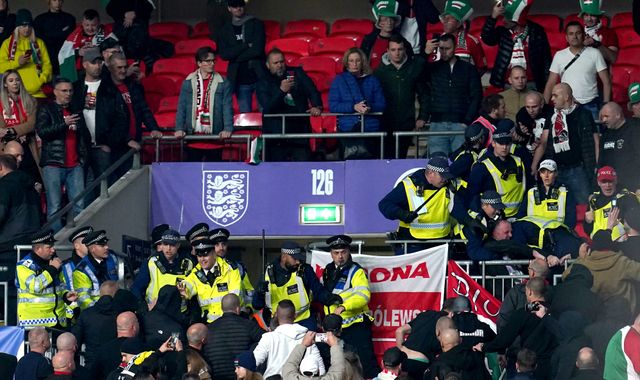 The Football Association could face punishment after FIFA opened disciplinary proceedings over the trouble involving Hungary fans at Wembley on Tuesday night.

FIFA has acted following disorder among Hungary fans during the World Cup Qualifier against England which saw visiting fans fight with police after one supporter was arrested for allegedly racially abusing a steward.

And the English FA - as the match organiser - is subject to the proceedings along with its Hungarian counterpart.

It was a night of trouble in World Cup qualifying Group I as the match between Albania and Poland was suspended for 20 minutes after the Polish players were pelted with bottles.

World football's governing body confirmed it would be investigating events at both games in a statement on Wednesday night, which read: "Following an analysis of the match reports, FIFA has opened disciplinary proceedings in relation to yesterday's England v. Hungary and Albania v. Poland FIFA World Cup qualifier matches.

"Once again, FIFA strongly condemns the incidents at both matches and would like to state that its position remains firm and resolute in rejecting any form of violence as well as any form of discrimination or abuse. FIFA has a very clear zero-tolerance stance against such abhorrent behaviour in football."

The Polish FA is the subject of proceedings, along with the Albanian FA, as some Poland fans were involved in incidents in the stands in Tirana.