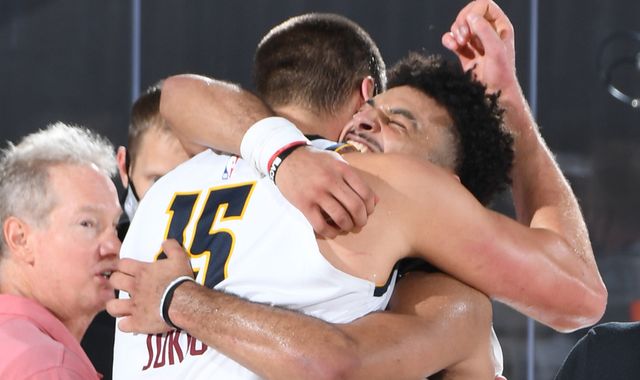 Jamal Murray scored 40 points and Nikola Jokic dominated with a triple-double as the Denver Nuggets completed a famous comeback in the Western Conference semi-finals with a 104-89 victory over the LA Clippers in Game 7 on Tuesday night.

The third-seeded Nuggets became the first NBA team to rally from 3-1 deficits twice in the same postseason. They defeated the Utah Jazz in the first round.

Denver will meet the top-seeded Los Angeles Lakers in the Western Conference Finals, beginning in the early hours of Saturday morning, live on Sky Sports.

Murray, who also had five assists, connected on 15-of-26 shots, including 6-of-13 from three-point range. Jokic had 16 points, 22 rebounds and 13 assists for Denver. Jerami Grant and Gary Harris contributed 14 points apiece.

Montrezl Harrell had 20 points for the second-seeded Clippers, who have never advanced to the Western Conference Finals in their history. They are now 0-8 when they had a chance, dating back to their days as the Buffalo Braves.

Kawhi Leonard managed just 14 points, Patrick Beverley scored 11 and Paul George finished with 10. Leonard shot 6-of-22, while George was 4-of-16 from the floor.

A three-pointer by Murray gave Denver an 89-74 lead with 8:48 remaining to cap a 7-0 run to open the fourth quarter. The Clippers went more than seven minutes without a field goal in the final period.

The Nuggets took advantage, boosting the lead to 100-80 on a dunk by Jerami Grant with 2:10 left.

In the third quarter, the Nuggets took control. After falling behind by seven, they used a 16-2 surge for a 70-63 lead after a three-pointer by Harris with 5:54 left in the quarter. Denver took an 82-74 advantage heading into the fourth quarter after outscoring Los Angeles 28-18 in the third.

Want to watch even more of the NBA but don't have Sky Sports? Get the Sky Sports Action and Arena pack, click here.