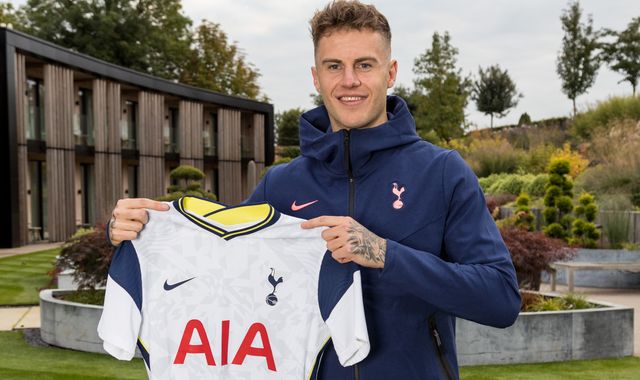 Tottenham have completed the signing of Swansea defender Joe Rodon in a deal worth an initial £11m rising to £15m, subject to international clearance.

The 22-year-old Wales international impressed for Steve Cooper's side in the Championship and has now completed his move to north London.

Rodon has signed a contract until 2025 and will wear the No 14 shirt at the Tottenham Hotspur Stadium.

Tottenham's interest in Rodon was long-standing, with Sky Sports News reporting earlier this month the two clubs had opened talks over a move for the player.

Jose Mourinho made it known of his desire to strengthen Tottenham's central defensive options, having already added full-backs Matt Doherty and Sergio Reguilon during the international transfer window.

Meanwhile, Tottenham defender Cameron Carter-Vickers has joined Bournemouth on a season-long loan deal. The 22-year-old came through Spurs' academy and has made four first-team appearances.

Will Joe Rodon become a star at Spurs?

Earlier this summer, Sky Sports EFL pundits Danny Higginbotham and Andy Hinchcliffe assessed Rodon's attributes as part of the Future Star series and explained why he is such a special talent.

"He's right up there in terms of position for his age," said Andy Hinchcliffe. "I think what you tend to do with young centre-halves is look at the greats of the Premier League. You look at Rio Ferdinand and John Terry and there are elements of both in Rodon's game.

"What I want from a centre-half is someone who loves to defend. Yes, they can play, but they don't just like defending, they really want to defend - they want to get in the line of fire, they want to stop the opposition scoring. That's what we see with Rodon. When the ball is there to be won, he wins it."

Swansea have dealt with Rodon's departure by completing the signing of Ryan Bennett from Wolves, subject to international clearance.

The 30-year-old centre-half has signed a three-year contract and will wear the No 2 shirt.

The former England U21 international brings a wealth of experience with over 100 Championship appearances to his name, as well as Premier League stints with Norwich, Wolves and Leicester.

Jose Mourinho: Why Arsene Wenger didn't mention me in his book

Jose Mourinho says Arsene Wenger did not mention him in his autobiography "because he never beat me".

Former Arsenal manager Wenger has this week released a new autobiography called, 'My Life In Red And White', but the exclusion of his former foe, Mourinho, has not gone unnoticed.

Asked to explain his absence from the book, Tottenham boss Mourinho said: "Because he never beat me.

"You are not going to do a chapter about 12 or 14 matches and never winning one.

"So why should he speak about me in his book. A book is a thing to make you happy to make you proud. So I understand perfectly the situation."

Harry Kane is evolving into a creator as well as a goalscorer under Jose Mourinho at Tottenham, writes Nick Wright.

One of Jose Mourinho's first acts as Tottenham manager was to summon Harry Kane to his office for a meeting. In it, as shown in All or Nothing: Tottenham Hotspur, he said he could help him "build his status" as one of the world's best players. "That's my aim," replied Kane. "I want to be [like] Ronaldo and Messi."

Mourinho said Kane could "explode" under the guidance of a manager who already enjoys that status - "my profile, I am little bit like that as a coach," he added - and given the two names Kane mentioned himself, the assumption was that the explosion referred to his scoring rate.

A year on, however, and Mourinho's plan for Kane looks different to how it was originally perceived. Rather than fixating on increasing his goal tally, he wants Kane to become a player who creates as well as scores, a player who serves the team in multiple ways.