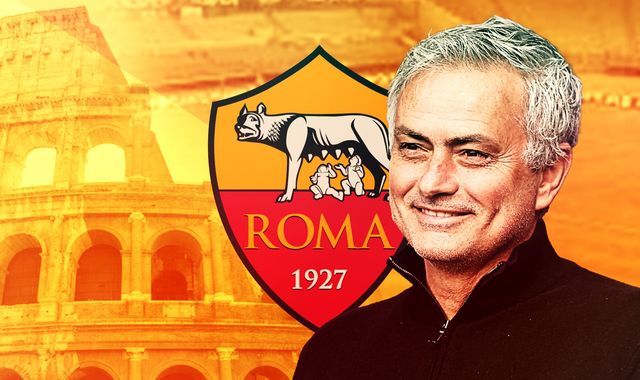 Jose Mourinho has been appointed Roma head coach on a three-year deal set to begin at the start of next season.

Mourinho was sacked by Tottenham in April after just 17 months in charge of the Premier League. The announcement of his appointment by Roma came just hours after the club confirmed that current boss Paulo Fonseca would depart at the end of the current campaign.

It will be the Portuguese manager's second spell in Serie A, after he spent two seasons with Inter Milan before leaving to join Real Madrid in 2010.

"After meetings with the ownership and Tiago Pinto, I immediately understood the full extent of their ambitions for AS Roma," Mourinho told the club's website.

"It is the same ambition and drive that has always motivated me and together we want to build a winning project over the upcoming years.

"The incredible passion of the Roma fans convinced me to accept the job and I cannot wait to start next season."

Mourinho won consecutive Serie A titles with Inter, completing a treble - that included a Champions League triumph - in his final season with the club.

The 58-year-old struggled to make an impact at Spurs and was sacked for the third time in six seasons by a Premier League club, following dismissals from Chelsea - in his second spell at the club - and Manchester United.

Despite that, Roma were attracted to the 25 major trophies Mourinho has claimed in his career and have wasted little time in agreeing a deal following his departure from Tottenham.

Roma 'blown away by Jose's desire to win'

"When Jose became available, we immediately jumped at the chance to speak with one of the greatest managers of all time," Roma general manager Tiago Pinto said.

"We were blown away by Jose's desire to win and his passion for the game: no matter how many trophies he has won, his primary focus is always on the next one. He possesses the knowledge, experience and leadership to compete at all levels.

"We know that in order to build a successful sporting project it takes time, patience and the right people in the right positions. We are supremely confident that Jose will be the perfect coach for our project, for both our immediate and long-term future."

Roma look set to miss out on Champions League qualification for next season as they sit seventh in Serie A with four games of the season, while their hopes of advancing to the Europa League final were all but ended in a 6-2 semi-final first-leg loss to Manchester United last week.

Serie A losses either side of that Old Trafford thrashing made it six games without a win in all competitions for Fonseca's side.

Fonesca, who is also Portuguese, was on a two-year contract that was set to expire at the end of the season.

Pinto added: "I would like to thank Paulo for all his work for the club over the last two seasons.

"Even if the results have not always been there on the pitch, we know that he has left many positive elements that will continue to help our development - like the many talented and young players he has encouraged and improved, and our progress in the Europa League this season.

"We are building a path to success at Roma, and Paulo has played an important role in that."

"It was a great secret even for everybody here in Italy. The deal started [to be negotiated] in the middle of April in the days after he was sacked by Tottenham.

"He had an approach from general manager Thiago Pinto and then he had a meeting with owner Dan Friedkin and he was immediately loved by the leadership, Mourinho wanted to come back to Italy after 11 years.

"They [the Roma hierarchy] saw in Mourinho the eyes of the tiger, he wanted to win in Italy again, AS Roma wants to win the title in Italy again.

"He has signed a contract for three years so has the potential to create a team to win the league over the course of this time.

"Everyone involved with Roma feels amazing about this news. It was a very interesting surprise for everyone here in Italy. Mourinho will be able to see how the team can improve over the next few weeks.

"Mourinho and Fabio Capello, (the manager who last won the title with Roma), are very similar. They work very well with the teams that they manage, to find motivation in every player, and Mourinho can help Roma to win something big in Italy after many years."

This is a serious statement of intent from the Friedkin family, Roma's new American owners. Jose Mourinho is their first appointment as manager since they took over the club in August last year. It wrong-footed and shell-shocked the whole Italian football landscape - fans, players and executives alike, and even all the journalists.

While the Roma fanbase were left reeling from a shocking Serie A run which saw them collect five points in eight games and a humiliating 6-2 defeat at Old Trafford in a much-awaited Europa League semi-final which could have saved their season, Dan and Ryan Friedkin put in the work behind the scenes to deliver one of the most seismic moments in Roma's recent history, possibly even surpassing Fabio Capello's arrival in 1999.

Roma and Tottenham share striking similarities - they are two big clubs who won their last trophy, a domestic cup, in 2008 and have enjoyed success on the European stage rather than at home in recent years. Just like Spurs, Roma have brought in the Special One to end that long and painful trophy drought and take the club to that next level - bridging the gap with Juve, AC Milan and Inter, the three Italian big sisters.

There is no doubt that Roma needed someone like Mourinho to resurrect their fortunes. The club have never had such a serial winner in their ranks and they are hoping he can follow in the footsteps of Antonio Conte at Inter Milan, who came in and won the club their first league title in 11 years just a couple of days ago.

Mourinho's appointment does mark something of a break in tradition as far as Roma's style is concerned. The club have tried to build an attacking-minded team, trying to win by playing spectacular and possession-based football with Fonseca. That experiment has now backfired, and Maurizio Sarri made up what seemed like the perfect alternative to continue that philosophy.

However, looking at the club's recent performances in Serie A, it makes perfect sense that the board were able to find the balance between their hunger to become a European heavyweight, signalled by the appointment of Portuguese general manager Tiago Pinto, and their domestic drive. Mourinho, the most Italian of foreigners, represents the perfect compromise to build a future where Roma can compete both at home and abroad.

Now it is imperative for the Friedkins to back Mourinho in the transfer market to kickstart a project which can truly return Roma to their former glory. Capello's arrival in the Italian capital in 1999 prompted the signing of Gabriel Omar Batistuta, one of the most prolific strikers in the world at that time, and Roma went on to win their third Scudetto in 2001. There are so many connections with the past that it's impossible for Roma fans now not to be excited about the future.

'Jose has his work cut out at Roma'

"Has he been overtaken by a new breed of managers like Jurgen Klopp and Pep Guardiola?

"If he manages to be successful at Roma, he would answer all of his critics because Roma are a sleeping giant.

"This is a club which has not won the Italian title for 20 years, the last time they won the title was when Fabio Capello was the manager.

"They are seventh at the moment, Jose Mourinho has his work cut out. This is not going to be easy, especially when you see what Antonio Conte has done at Inter and the fact that Juventus will come back again next season.

"This is going to be a very difficult task, and if he wins the title with Roma it will be one of the biggest achievements of his career.

"Jose Mourinho's reputation has always been very high in Italian football, in his two seasons at Inter he won the title and then the treble in his second season.

"It is a bit of a risk for Jose but we all know what he has achieved in the past. You have to say of all the people available at the moment, Jose has by far the best CV."

Mourinho had hinted at a swift return, telling Sky Sports News when asked if he wanted a break from the game: "No need. I am always in football."

But Jamie Carragher said he felt the "ship had sailed" on Mourinho's Premier League management career and predicted a return to Italy.

"I don't see Mourinho back in the Premier League, I think that ship's sailed now," he said on Monday Night Football.

"Would he go to a middle of the table club? I just don't see him there, I really don't. It's either international football or maybe Italy.

"The Italian champions this year will be Inter Milan, with Antonio Conte, who plays his type of football - so maybe you can get away with it a little bit more in Italy, because it was certainly a turn-off for Spurs supporters."

'Daniel Levy and Jose Mourinho rolled the dice with the Portuguese's appointment as Tottenham manager. Seventeen months on, the gamble has emphatically failed to pay off for either side.

'The shock was not in his departure but in the timing of it, coming just days before the club's Carabao Cup final with Manchester City at Wembley.

'After all, Mourinho was brought to the club to turn Tottenham into silverware winners - but with Spurs on course to finish outside of the top four for the second season in a row, criticised for the negativity of their football, and with uncertainty surrounding the futures of numerous key players, Levy dramatically pulled the plug on the project.

'It was a strikingly swift move from the Spurs chairman, given the fact that in November 2019 he took the big decision to trade Spurs' historical style and panache for a more ruthless edge under Mourinho, a manager he'd been targeting for a long time. The objective was to turn Mauricio Pochettino's too-nice nearly-men into battle-ready winners.

'But it was a calculated risk from Mourinho's side, too. After the damage caused by his Manchester United tenure, he staked his reputation rebuild on a Spurs squad he first described as "very, very good" - but knowing he would not have the transformative spending power he had previously had at former clubs.

'At the end of it all, Levy is facing Spurs supporters rebelling over two fruitless campaigns, in which only fleeting moments of individual brilliance lit up a risk-adverse, anti-ambition approach to the game. Still no major silverware and now no flair.

'Throw in the scornful reaction of the club's supporters to Spurs signing up for the European Super League and Levy's popularity had plummeted. And while Mourinho fought bitterly to defend his reputation, but his status as a top-level modern-day coach has diminished...'