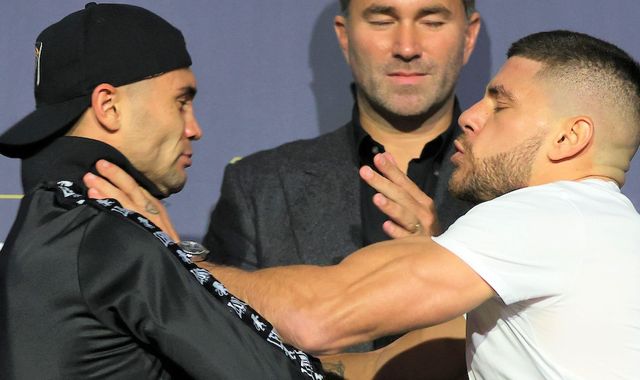 Florian Marku was escorted off stage by security and then shoved opponent Maxim Prodan at the Joshua vs Usyk undercard news conference.

The Albanian welterweight challenges Prodan for the IBF international welterweight title on this Saturday's bill at Tottenham Hotspur Stadium, live on Sky Sports Box Office, and their rivalry boiled over in front of the cameras.

Marku tried to confront Prodan during a heated verbal exchange, but was stopped by security, and then pushed his Romanian rival as they posed for pictures at the pre-fight face-off.

"He has never boxed someone like me in his life and I'm going to show that on Saturday," Marku had said.

"I heard also in his interview that he said that Florian made a mistake. I'm going to show to everyone what level I am and I start this Saturday, and then you will see.

"This is my beginning, this is my time. I've been waiting from a small kid for this moment.

"I talk too much, but I beat much better, and you're going to see that on Saturday."

Prodan replied: "I don't talk too much like Florian, but we will see Saturday.

"Marku, you are a nobody. You are coming from another sport. I will show you what is boxing on Saturday."

The former kickboxer reacted furiously, saying: "We can fight in here if you want?

Security then stepped in to move Marku away after he had risen from his seat and moved towards Prodan.

On an action-packed Joshua vs Usyk bill, Lawrence Okolie defends his WBO cruiserweight title against Dilan Prasovic, while Callum Smith returns at light-heavyweight against Lenin Castillo, and Campbell Hatton continues his pro career against Sonni Martinez.

Watch Joshua v Usyk on Saturday, live on Sky Sports Box Office, from 6pm. Book it via your Sky remote or book it online here. Non-Sky TV subscribers can book and watch it here.