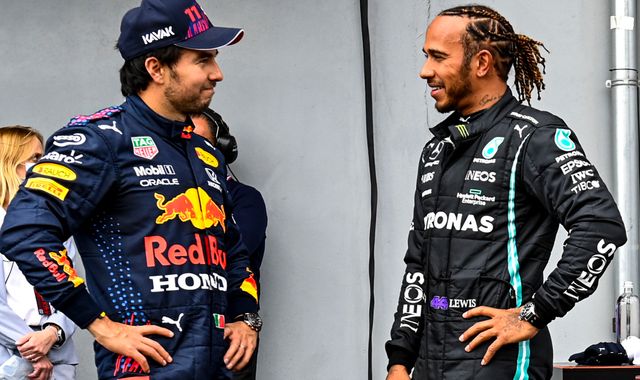 Lewis Hamilton insisted he was genuinely "shocked" to have overcome the Red Bulls for his first pole position of the 2021 season at the Emilia-Romagna GP - and admitted F1's fierce new inter-team fight was "challenging me in a different way".

The seven-time world champion celebrated his 99th F1 pole at Imola on Saturday but said he had not been expecting to top qualifying, particularly after final practice earlier on Saturday when Max Verstappen outpaced him by six tenths of a second.

"For us it's a real surprise," said Hamilton to Sky Sports F1.

"You heard it on the radio for us. We do have a small deficit in performance, we felt at least. We saw it in the last race, we've seen it through the weekend.

"Obviously they've had quite a messy weekend, they've had problems, so you've never really seen their true pace until P3 where he [Max] was six tenths ahead. We couldn't match that.

"It was definitely an unknown going into qualifying but we are a team that pulls together and maximises when the pressure is on. Ultimately that's what happened today."

Both Sergio Perez and Max Verstappen, who qualified second and third respectively for Red Bull, pointed to errors on their respective laps.

Perez felt he would have certainly claimed a first career pole without his mistake, having finished second to Hamilton by a scant 0.035s margin. Verstappen was also within a tenth of first place.

Hamilton was pleased with his pole-winning Q3 lap - which, unusually, came on his first attempt in the final session - and continued to speak glowingly about how much he was enjoying the challenge Red Bull are posing to Mercedes.

"I love it! It's so exciting," said a smiling Hamilton. "I'm sure it's exciting for the fans.

"It's challenging me in a different way than we've had for some time.

"I thought maybe third or second today would have been the position we'd have, and I honestly hadn't envisaged we would be on pole. So it's a shock. As I said for me and Bono [Peter Bonnington, Hamilton's race engineer], we were all a bit surprised. But honestly my lap was nice."

But 'nice' would not be the word that team-mate Valtteri Bottas would use to describe his experience of Q3 on Saturday.

The Finn, last year's Imola polesitter, had started the weekend in competitive shape and was the quickest driver when qualifying started in Q1.

But in a sudden drop in performance for the final phase that Bottas described as a "little bit confusing", he ended up qualifying eighth. Mercedes say they will analyse what went wrong.

"On the first run of Q3 I had oversteer and then the second run, the rear end was not so good," added Bottas. "Not what I was aiming for today, especially with the feeling I had at the start of qualifying."

Bottas' woes mean that Hamilton is surrounded by Red Bulls for the start of Sunday's 63-lap race, with Mercedes' rivals also having the added strategic advantage of Perez (softs) and Verstappen (mediums) starting on different tyres.

For much of last season, it was Verstappen who was riding solo against two Mercedes' at the front of the field, so roles are effectively now reversed for Hamilton on Sunday when the lights go out at 2pm.