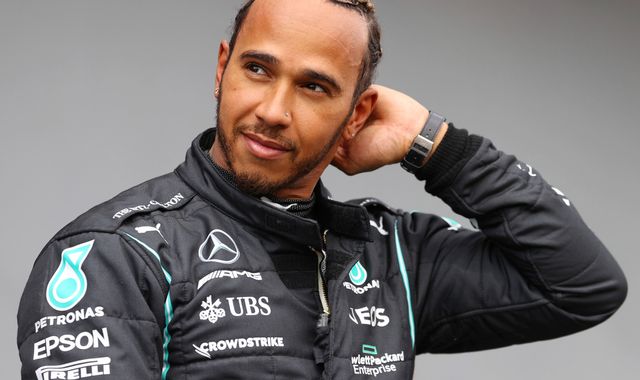 Hamilton had been quiet throughout the Imola weekend but burst into form in Saturday's shootout, with his first Q3 lap - a 1:14.411 - enough to hold off the competition as the seven-time world champion single-handedly carried the fight for Mercedes against F1's charging Bulls.

Hamilton was just 0.035s ahead of Perez, who out-qualified Verstappen on just his second race weekend in the Red Bull.

"I definitely didn't expect us to be ahead of two Red Bulls," said Hamilton. "They have been so quick this weekend."

Perez, who will start on the front row for the first time in his 192-race F1 career, insisted: "I should have been on pole today."

Verstappen finished 0.087s back - beaten fair and square by a team-mate in qualifying for the first time since 2018.

Ferrari's Charles Leclerc qualified fourth as, in a major surprise, Valtteri Bottas could only manage eighth in the other Mercedes. The Finn, who was on pole at Imola last year and topped both Friday practice sessions this year, made mistakes on both his crucial Q3 laps.

Pierre Gasly, Daniel Ricciardo and Norris will all start ahead of Bottas for Sunday's race, although Norris was downbeat after the session as he had a quick final lap deleted for infringing Imola's tight track limits.

The McLaren youngster's time would have been enough for third had it have stuck.

Esteban Ocon and Lance Stroll were ninth and 10th as the young pair outqualified their multiple world champion team-mates, with Fernando Alonso and Sebastian Vettel both knocked out in Q2.

Carlos Sainz was another shock exit from Q2 in the Ferrari.

Both Williams made it through from Q1 for the first time since the third race of 2020, although that segment was overshadowed somewhat by a big session-ending crash from AlphaTauri's rookie Yuki Tsunoda.

Hamilton vs Red Bulls in Imola as Perez beats Verstappen

Saturday's qualifying was thrilling from start to finish as drivers were pushed to their limits around Imola - a narrow, old-school and, as shown with Tsunoda's early shunt, unforgiving circuit.

It all looked to be heading towards a Mercedes vs Verstappen finale as Hamilton, Bottas and Verstappen proved evenly-matched through the first two segments.

But Bottas was nowhere near his rivals when it mattered most.

And a head-to-head battle between Hamilton and Verstappen - just like in Bahrain three weeks ago - may be on hold, too.

Hamilton left the door open for the Red Bulls after failing to improve on his final lap, but Verstappen only found 0.004s of pace - which in turn left the opportunity for Perez.

Both Red Bulls were within a tenth of Hamilton, and both felt they could have done better.

"It was just really a scrappy lap and I haven't had that in a long time," said Verstappen.

But all is certainly not lost for F1 2021's early favourites Red Bull, who have a major advantage for Sunday's race due to Bottas being down the order.

That means Verstappen, who so often has been left alone to battle against Mercedes over the years, now has a partner to put pressure on Hamilton - with Perez set to start on soft tyres to Hamilton and Verstappen's medium.

The top eight from qualifying were split by less than half a second as 2021's new rules continue to look to have brought the field closer.

That means Leclerc will have a tough task of keeping midfield rivals at bay without the assistance of a team-mate, with McLaren's Norris a particular threat after missing out on a Verstappen-beating qualifying time after exceeding track limits by a foot.

It looks set to be a thrilling second race of the 2021 season.