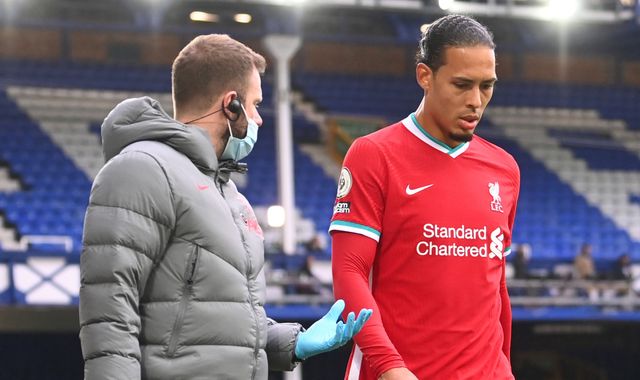 Jurgen Klopp confirmed Liverpool are waiting to discover the extent of injuries suffered by Virgil van Dijk and Thiago Alcantara in the 2-2 draw against Everton on Saturday.

Van Dijk was substituted after Everton goalkeeper Jordan Pickford raced out of his goal and clattered the Netherlands centre-back knee-high in the eighth minute.

Thiago, meanwhile, played the full 90 minutes but Klopp revealed the Spain international was in discomfort after the game following a late challenge on the midfielder by Richarlison, which led to the Brazilian being sent off in the 90th minute.

"When I left the pitch, Thiago told me in the red card situation with Richarlison he thinks he got injured," Klopp said in his post-match press conference, with both players sent for scans on their injuries.

"We will see if it's true or not, but if he felt like this then we need to have a look."

When asked about the severity of Van Dijk's injury, Klopp added: "It's not good. Virgil played so many games in a row, but he couldn't play on, so it is not good."

Pickford was saved from conceding a penalty - and possibly being shown a red card - by a marginal VAR decision which ruled Van Dijk's shoulder was offside, with Liverpool leading at the time of through Sadio Mane's third-minute strike.

The England goalkeeper could have been sent off if VAR had recommended on-field referee Michael Oliver look at the incident again as players can be punished for serious foul play or violent conduct after the whistle is blown.

Everton benefitted from the absence of Liverpool's defensive linchpin as the hosts equalised in the 20th minute.

Adrian was forced to parry Dominic Calvert-Lewin's shot behind and from the resulting corner the Liverpool goalkeeper got both hands to Michael Keane's header but could only push it into the roof of the net.

Mohamed Salah scored his 100th goal for Liverpool to put the Reds back in front with 18 minutes to go, before Dominic Calvert-Lewin's header salvaged a point for Everton.

Unlike the earlier Pickford incident, there was no VAR reprieve for Richarlison's lunge on Thiago, while Jordan Henderson also thought his stoppage-time goal had won it for Liverpool only for it to be ruled out for the tightest of offsides.

Klopp added: "It's tricky, but we've lost one player in a situation where VAR was not involved [Pickford on Van Dijk] and maybe another one in the red card situation [Richarlison on Thiago], and we've scored a legitimate goal which didn't count. It was obviously not our day but it was the performance I wanted to see."

Klopp: Pickford challenge should have been looked at

Klopp was also in no doubt that England goalkeeper Pickford's challenge on Van Dijk should have been reviewed by the VAR.

He said: "In the game, that was pretty quick. For me it was a clear penalty that I saw. Then obviously we saw the flag went up, so offside. I still thought it was worth a look on the foul but that didn't happen.

"We have no power there, we just sit here and you discuss it with me. You have to ask other people about that, not me. What can I say?"

Sky Sports pundit Gary Neville took to Twitter to say the challenge warranted both a penalty and a red card for Pickford, while former England international Sue Smith on Soccer Saturday added: "Pickford flew out and it's an awful challenge on Van Dijk. You can see his knee twist.

"It was given as offside - if not it was a penalty and Pickford could have gone for that. It's a real horrible challenge."

Richarlison issued a public apology to Thiago after the match and insisted he never intended to hurt the Liverpool midfielder.

"Everyone who knows me knows I've never been a violent player," said the Brazilian, in a statement released on Twitter.

"What happened today was simply an accident caused by pure dedication. I didn't go into that tackle with the intention of injuring Thiago. When I saw there was going to be a collision, I withdrew my foot and struck his knee, which was inevitable given the speed involved.

"I've already sent him a message apologising and I'm also doing so publicly here. I hope he hasn't sustained an injury and everything is OK.

"I also apologise to my team-mates, my club and the fans for leaving the team a man down at the end of the game. Unfortunately, there's nothing I can do to change what happened, except reflect, work hard and move on."