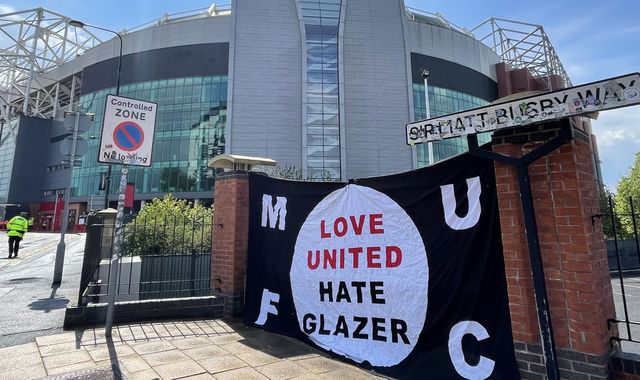 A number of supporters forced their way into Old Trafford prior to Sunday's scheduled 4.30pm kick-off against Liverpool as a demonstration against the club's owners, the Glazer family, escalated into incidents of damage and violence.

The fixture was postponed around an hour later amid the disruption with a decision yet to be made on a re-arranged date for the game to be played.

The force said one officer sustained a fractured eye socket, another suffered a facial wound and a third was "dragged and kicked".

It did not say what offence the man had been arrested on suspicion of, but added it was "reviewing all obtainable evidence" to identify the organisers of the demonstration and those responsible for assaulting officers.

"Six police officer injuries have been reported so far with one officer receiving a fractured eye socket, requiring medical treatment, and another sustained a wound to his face, following bottles and cans being thrown from the crowd," a statement from Greater Manchester Police read.

"A third officer was dragged and kicked. The officer who attended hospital has since been discharged.

"A 28-year old man has been arrested as a consequence of this investigation and all available evidence is being urgently reviewed to identify both the organisers of this protest and those responsible for the officer assaults."

GMP Assistant Chief Constable, Nick Bailey, said: "The behaviour shown at this protest was absolutely atrocious. Officers were just trying to do their job and facilitate a peaceful protest.

"However a number of those present became hostile and aggressive towards officers and forced entry to the football grounds, making it very clear that this protest was not peaceful and ruining it for the majority of protesters who had not intended for the protest to become violent.

"Our officers tried to engage with protestors, but were met with violence and aggression which resulted in enforcement action being taken. Enforcement will always be a last resort, but in these circumstances it was deemed necessary in order to maintain safety during a situation that was rising in hostility.

"No officer should have to come to work and face these conditions. This violence was completely unnecessary and resulted in officers being taken from front line policing and neighbouring forces to prevent the disorder getting worse, putting increased pressure and strain on our service and ultimately taking away resources from those who may be in desperate need of our help.

"We are reviewing all obtainable evidence and following all lines of enquiry available to us in order to identify the organisers of this protest as well as those responsible for the officer assaults. If anyone has any information at all in regards to this, or any mobile phone footage from the event itself, please do get in touch with police as soon as possible."

Greater Manchester Police Federation said the officer who sustained an eye injury was "lucky not to lose his sight".

The organisation said the officer remains in "lots of pain" and will need an extended period off work to recover.

Stu Berry, chairman of the federation, said: "Our brave colleague went to work yesterday to keep the people of Greater Manchester safe - and he ended up coming under attack. He is incredibly lucky not to have lost the sight in an eye."

The Greater Manchester force's investigation into the disorder at Old Trafford on Sunday is ongoing.

The protests were a demonstration from Manchester United supporters unhappy with the Glazer family's 16-year ownership of the club and came two weeks after United were announced as a founding member of the now-collapsed European Super League.