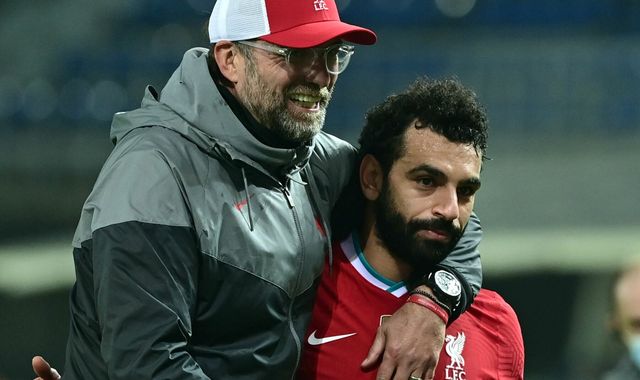 Liverpool manager Jurgen Klopp has spoken to Mohamed Salah about his attendance at his brother's wedding prior to him returning a positive Covid-19 test.

While the Reds boss refused to elaborate on what was said to the Egypt international, who is flying back to the UK on Friday, Klopp set out his own personal stance which was at odds to his player's.

"Mo is back today (Friday)," said Klopp. "We're obviously in close contact with him all the time.

"As always in these cases, the moment you have a negative test then the process really starts. He's in a good place, he feels well, no symptoms. That's all fine.

Listen to the Sky Sports Pitch to Post Podcast on: Spotify | Apple | Castbox

"The other thing (Salah attending his brother's wedding), there is absolutely nothing to say in public. All the things I have to talk to my players about is not for the public.

"What I can tell you is I was in Germany for the summer and a friend of mine moved his birthday party because he knew I was back. Fifty people attended but I decided at the last minute not to go.

"That was only a birthday party and it was allowed in Germany at the time. It was outside, all that stuff, but I didn't go.

"That's only one situation. In other countries and situations, there is more social pressure on you.

"A brother's wedding is a very special moment. What I can say is our players, they are very incredibly disciplined. They really know about the situation.

"Sometimes it doesn't work out and something happens. Now we're in the situation we are in.

"All the rest is just between Mo and me, and we have done that already. Things are fine."

Klopp confirmed injured pair Jordan Henderson (thigh) and Trent Alexander-Arnold (calf) will miss Sunday's Premier League game against Leicester but he is hoping Fabinho will be fit again after missing the last three matches with a hamstring injury.

Leicester sit on top of the Premier League table heading into this weekend and Klopp praised the manner in which Brendan Rodgers' side have started the season, despite suffering their own injury problems.

"Leicester showed not only last year how good they could be, but this year again," said Klopp.

"They changed their style slightly, maybe because of the injuries they had. They gave a good example of how to deal with an injury crisis.

"They are in a good moment and have a clear idea about how they want to play. It is a tough one.

"They are contenders for everything. They were last year for a long period and this year they are more experienced."

Jamie Vardy has been in free-scoring form for the Foxes, netting nine times in eight Premier League games.

When asked what makes Vardy so difficult to stop, Klopp replied: "His speed, first and foremost. It is incredible how he uses it. How he has developed his game over the years, he is a massive threat.

"He really gambles in a good way with the last line, taking a risk in these situations. His technical level is really good as well, not only his finishing.

"He's a proper player and it's always a challenge to defend him. The only way I know is to make sure he doesn't get the pass he wants. That means we have to defend all the others as well."

Liverpool's injury crisis: How will they cope vs Leicester?

Vinny O'Connor joined the Pitch to Post Preview Podcast to assess Liverpool's growing injury list and how it will affect Jurgen Klopp's team selection and tactics against Leicester on Sunday.

Avoiding defeat would be enough for Liverpool to surpass their unbeaten home league run of 63 games, and Sky Sports News reporter O'Connor said things may not be as bad as they seem given the club's recent run of results.

"Result-wise, Liverpool rattled off five straight wins before the Man City draw," he said. "They've only lost once all season, twice if you include the Arsenal penalty shootout in the League Cup.

"Even going back to that Aston Villa defeat, they had a full-strength side out. They've got the chance this weekend to go back to the top of the table, they're at home to Leicester, they've equalled the club-record 63 league games unbeaten at home. They've obviously been able to cope with the injuries they've picked up since the Villa game.

"Yes, injuries have impacted on them, but they have been able to utilise that squad and grind out those results which have kept them in contention."

Plus, Sky Sports News reporter Vinny O'Connor has the latest on Liverpool's growing injury list ahead of their clash with Leicester, and his colleague Mark McAdam lifts the lid on Southampton's strong start to the season.

And Sky Sports football journalist Ron Walker talks Leicester and West Ham, and makes his Pitch for what will happen in the Premier League this weekend.

Listen to the Sky Sports Pitch to Post Podcast on: Spotify | Apple | Castbox