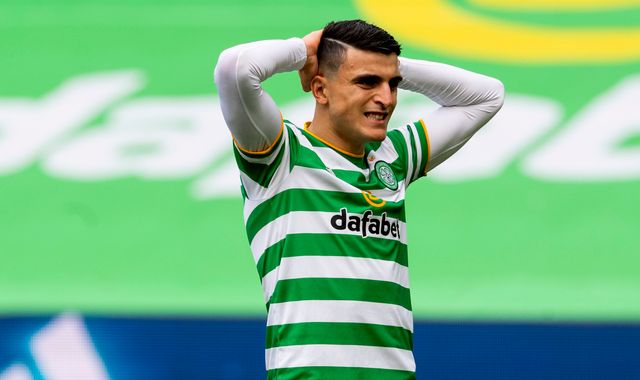 Neil Lennon says his "decimated" Celtic side will have to "build for better" after a limp showing in their Old Firm defeat by Rangers, while Steven Gerrard feels his team will "remain humble" despite their impressive victory.

Celtic were without any of Odsonne Edouard, Nir Bitton, Hatem Abd Elhamed and Ryan Christie for Covid-19 related reasons, but even so failed to register a single shot on target against their biggest rivals at Celtic Park.

After the 2-0 defeat, Lennon told Sky Sports his side "didn't have enough" in the derby, but suggested the manner of Rangers' two goals, scored nine minutes into either half by Connor Goldson, had been the major difference between the two teams.

"We've given away two poor goals from our point of view, one from a set play and the second from a second-phase set play," he said. "We missed a great chance to equalise, goals change games, the psychology of the games, but we didn't have enough today.

"We didn't have enough sort of sharpness, and the boys coming off the bench didn't have the impact we were hoping for. We have to take this result and performance and look at it, and start to build for better.

"We've got Ajeti not fully fit, Griffiths not fully fit, Edouard out, three main strikers out missing today to start with. But I felt we created a few chances first half to score, Rangers defended their box pretty well, and I think that was the difference in terms of the psychology of the game.

"We were pretty decimated coming into the game, but we felt we had a strong enough team and it looked that way at half-time. The second goal is poor from our point of view, and you're chasing the game after that."

Despite the relative comfort of their dominant performance on away soil, Rangers boss Gerrard said his side had not been at their "fluent best", while admitting they could have scored more had Ryan Kent found the back of the net with a pair of second-half chances.

With Rangers now four points clear of their title rivals, albeit having played a game more than Celtic, the ex-Liverpool captain said his team would be keeping their feet on the ground after registering back-to-back league wins at Celtic Park for the first time since 1995.

He told Sky Sports: "We've put in a really controlled, professional performance. I don't think we were at our fluent best, but we've come here and controlled the game with and without the ball. Allan McGregor hasn't really been tested.

"Celtic threw everything at us. They started with Klimala, brought on Griffiths - who has scored in this game before - Ajeti and Turnbull, good players worth a lot of money.

"That's where I'm most pleased with my team - we controlled everything Celtic threw at us and managed the game really well.

"We could maybe have scored more. There will be no getting carried away. We need to remain humble."