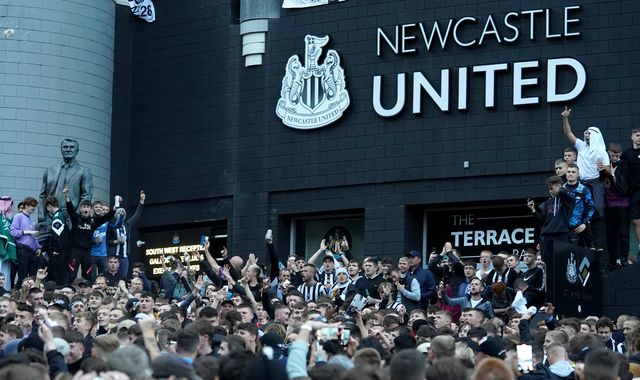 The Premier League has been urged to meet with Amnesty International after last week's Newcastle takeover by a Saudi Arabia-backed consortium.

Deshmukh said: "The way the Premier League waved this deal through raises a host of deeply troubling questions about sportswashing, about human rights and sport, and about the integrity of English football.

"How can it be right that the Premier League's current owners' and directors' test has nothing whatsoever to say about human rights?

"The events of last week will have lent even more urgency to the Government's ongoing review of the governance of English football.

"Football is a global sport on a global stage - it urgently needs to update its ownership rules to prevent those implicated in serious human rights violations from buying into the passion and glamour of English football.

"We hope that Richard Masters will see that making the football's ownership rules human rights-compliant can only be for the long-term good of the game."

The Premier League approved Newcastle's takeover after receiving "legally binding assurances" that the Saudi state would not control the club.

The Crown Prince of Saudi Arabia, Mohammed bin Salman, is listed as chair of PIF, but the Premier League was satisfied the state would have no dealings with the club.

This updated test was sent to the Premier League last July, Amnesty said, when it appeared the Saudi-led consortium's deal was unlikely to proceed.

"However, the speedy finalising of the deal last week has lent new impetus to calls on the league to urgently update its ownership rules," Amnesty said.

"Amnesty's analysis shows the current ownership test has numerous serious shortcomings, with no bar on ownership for those complicit in acts of torture, slavery, human trafficking or even war crimes."

The PA news agency has been sent a copy of Amnesty's letter to Masters, in which the Chivers document - "Proposed change to the Premier League Rules Owners' and Directors' test to address international human rights and discrimination" - was attached.

In the letter, Deshmukh added: "David Chivers has asserted that this proposed revision is reasonable, measured, goes with the grain of best practice across sporting bodies, and could be implemented without cutting across other elements of the Premier League's rules.

"I am asking you to give careful consideration to what is proposed, with particular regard to establishing a corporate culture that is aligned with the Premier League's purpose and strategy, promotes integrity, values diversity and is reflective of broader stakeholder concerns."