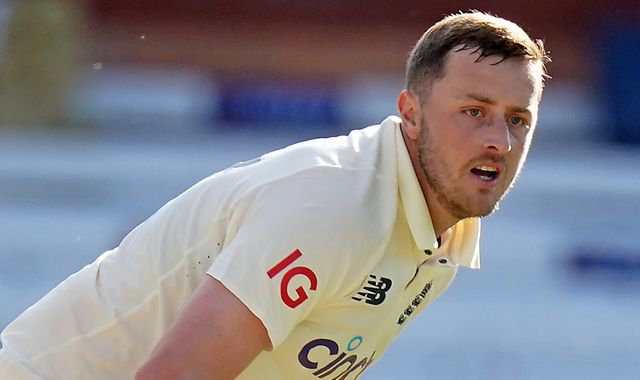 Seamer Ollie Robinson has been recalled to England's Test squad for the first two matches of the five-game series against India but Jofra Archer and Chris Woakes are sidelined by injury.

Robinson was given a fine and an eight-match ban, five of which are suspended for two years, for "a number of offensive tweets" he sent between 2012 and 2014, but earlier this month was cleared to return to international duty.

The 27-year-old is joined in the 17-player squad by Ben Stokes, who sat out the two-match series against New Zealand in June after sustaining a fractured finger in the Indian Premier League.

The all-rounder returned to international cricket ahead of schedule to captain England to a 3-0 series win in the Royal London Series against Pakistan earlier this month after skipper Eoin Morgan and the entirety of his squad were forced to self-isolate after a coronavirus outbreak in the first XI squad.

Jos Buttler, Jonny Bairstow and Sam Curran also come back into the Test squad but Archer (right elbow) and Woakes (bruised heel) are both unavailable.

Archer continues to progress following elbow surgery but is not ready at this point to return to Test cricket. Woakes suffered a bruised heel last week and is undergoing a rehabilitation programme aimed to allow him to be fit and available later in the series.

Head coach Chris Silverwood said: "A home Test series against India is one of the most anticipated red-ball series and this promises to be an outstanding five Tests.

"India are a quality team who have shown their ability to get results away from home. We are expecting a highly competitive series and have selected our strongest possible squad.

"The returns of all-rounders Ben Stokes and Sam Curran provide balance that allows us to get back to a structure that has been successful in Test cricket.

"Ben's leadership in the Royal London Series, when he played despite his finger not yet being 100 per cent, typified his character and commitment that drives the players around him forward. With Jos and Jonny back in the squad we have added further experience and quality that will be needed against the world's second-ranked team.

"We have selected Ollie Robinson after his seven-wicket Test debut against New Zealand. Ollie proved in that Test that he has the ability to replicate his outstanding form in the County Championship at international level and we will continue to work with him to develop his England career."

The squad will report to Loughborough on Saturday July 31 ahead of the first LV= Insurance Test starting at Trent Bridge on Wednesday August 4.

The players selected in the squad will be available to play in The Hundred for each team's first two matches before joining the Test squad.