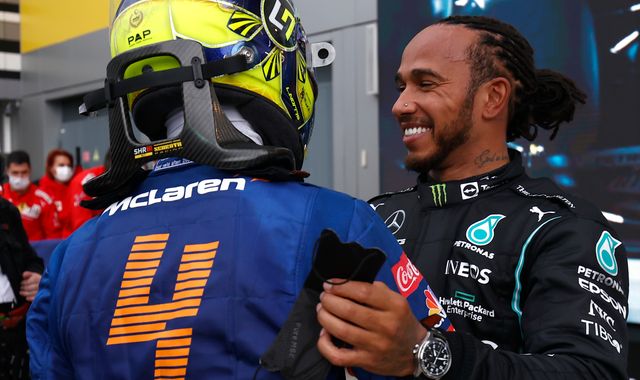 Lewis Hamilton won a simply astonishing Russian GP after long-time race leader Lando Norris suffered late heartbreak by spinning his McLaren off in heavy rain, with Max Verstappen benefitting to complete his comeback from the back of the grid to an unlikely second.

Following a dramatic and soaking wet finale, Hamilton took both the championship lead and his 100th Formula 1 victory - but the Sochi race was destined for his young British compatriot who was so close to his very first triumph.

Pole-sitter Norris was heading towards that maiden F1 win after re-overtaking Carlos Sainz and then leading the majority of the race, even keeping his cool as Hamilton came charging through in the Mercedes after a difficult start of his own.

But as rain started falling with just eight laps to go, then getting increasingly heavier, Norris opted to stay on his slick tyres while Hamilton and the majority of the field changed for intermediates.

The decision turned out to be catastrophic as he could not control his McLaren in the conditions, spinning off into the barriers on Lap 51 of 53. Hamilton, who also wanted to stay out before being overruled by Mercedes, was then there to capitalise.

"I'm unhappy, devastated in a way," said a tearful Norris after the race. "It was my decision, I thought it was the way to go."

"Lando did such an amazing job, he had incredible pace," added Hamilton, who recovered after dropping from fourth to seventh on the first lap.

"It would've been tough to get past Lando unless we came up to some traffic or he made a mistake... so then the rain came and it was very opportunistic."

Hamilton claimed victory, although Verstappen was arguably the big winner as the Dutchman, who was running seventh before the rain as his early charge through the field from the back faded, changed tyres earlier than many others and finished second.

The end result means Verstappen has lost his title lead - which Red Bull expected with their engine penalty - but Hamilton is only two points clear in the standings.

Sainz completed the podium, finishing ahead of Daniel Ricciardo, Valtteri Bottas, another driver to benefit from the rain, and Fernando Alonso.

Norris fell to seventh, although mercifully he avoided a penalty for crossing the white line when finally entering the pits for the wet tyres.

The closing stages of the Russian GP were exciting, unpredictable, but also absolutely agonising for Norris.

Norris superbly chased down Sainz and then pounced on his former team-mate before stretching a big lead; he was 12 seconds clear of team-mate Ricciardo and Hamilton at the halfway stage.

A slow pit-stop from Ricciardo released Hamilton into clear air but Norris, while understandably slower than Hamilton with Mercedes by far the class of the field, remained composed and the seven-time champion couldn't stay in DRS range of his young rival as the race headed into the final 10 laps.

Then came the rain, and a decision that Norris and McLaren were left to rue.

McLaren asked Norris if he wanted to pit and Lando consistently gave a resounding "no". That wasn't an outlandish answer on Lap 48, with the rain still light and most other drivers also sticking on the slick tyres.

But a lap later Hamilton was called in - to his dismay - as Mercedes told their driver that more rain was coming. McLaren kept Norris out, and a torrential downpour did indeed land, making it impossible for those who stayed out to keep their cars on the track.

Hamilton closed Norris down before he couldn't stop his McLaren into the first corner and slowly nudged into the barriers - then forced to limp around the circuit to finally fit wet tyres.

But by then, his hopes were, devastatingly, well and truly over.

"It was the wrong one at the end of the day but I made the decision just as much as the team," said Norris, although McLaren took responsibility after failing to make it back-to-back F1 2021 wins.

"We didn't get it together as a team in hindsight, it was the wrong decision to stay out," admitted team boss Andreas Seidl.

"There is always a chance to overrule him from the pit wall side. We wanted to go for the win, that's why we decided together to stay out and it just didn't work out."

Hamilton and Verstappen also had rollercoaster afternoons but, quite incredibly, ended up sharing the top two positions.

From Hamilton's side, he had a bit of a nightmare start from fourth - a grid position enforced after his two crashes in qualifying - dropping behind Ricciardo, Lance Stroll and Alonso in the opening stages.

He cleared Alonso before Stroll's pit-stop, but was then stuck behind Ricciardo, as Norris extended his lead.

Fortune came Hamilton's way after Ricciardo's slow pit-stop, which allowed him to run longer and still emerge on track ahead of the McLaren after pitting.

He was then free to chase down Norris, and was around a second-per-lap faster than the McLaren - but couldn't get past a car that was quick on the straights. The rain offered him solace, with Hamilton admitting he didn't think he would have passed Norris without it.

He praised Mercedes for their pit-stop decision, particularly as he, like Norris, didn't want to come in. His record-extending 100th win was certainly one of his most dramatic.

Verstappen, meanwhile, was only aiming for a top-five finish but ends up with an amazing second.

He made a flying start to the race, making ground from 20th and also overtaking Bottas, but became bogged down during his second stint, even overtaken by Fernando Alonso in the Alpine.

Unlike Hamilton, Verstappen made the decision himself to pit for intermediates - and what a call it was.

The season now rolls onto the Turkish GP on October 8, the first of seven races to close 2021. With just two points splitting the title protagonists, this is going to be some conclusion.