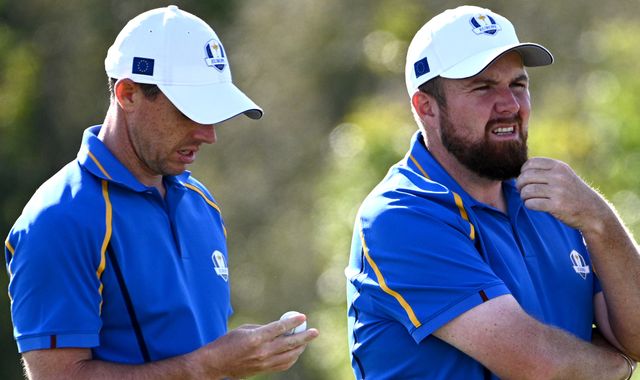 Rory McIlroy has been left out of Team Europe’s line-up for the Saturday foursomes, with Jon Rahm and Sergio Garcia sent out again to lead out Padraig Harrington's side.

McIlroy has featured in every session for Team Europe since his debut in 2010 but has been dropped by Harrington after losing both of his matches on the opening day, where Steve Stricker's American side built up a commanding 6-2 advantage.

The Northern Irishman was defeated alongside Ian Poulter in the foursomes and was paired with Shane Lowry in the fourballs, the first time McIlroy has lost twice on the same day at the Ryder Cup, with both of his playing partners also not included in Harrington's Saturday morning line-up.

"I'm very comfortable again with the team I've put out," Harrington said. "Wait and see in each of those matches whether they can create their own momentum and then bring that to the team."

Rahm and Garcia reunite after winning Europe's only full point on the opening day, with the all-Spanish pairing facing Brooks Koepka and Daniel Berger in the first match at 7.05am local time (1.05pm BST).

Stricker has stuck with the same four foursomes pairings that won three points on the opening morning, with Dustin Johnson and Collin Morikawa sent out to play Paul Casey and Tyrrell Hatton and Xander Schauffele and Patrick Cantlay facing English pair Lee Westwood and Matt Fitzpatrick.

Jordan Spieth, the only American player not to win a point on Friday, teams up with Justin Thomas once again as the all-star pairing take on European rookies Viktor Hovland and Bernd Wiesberger.

Tommy Fleetwood, who partnered Hovland to claim a half-point in the fourballs, once again misses out for Team Europe, with Bryson DeChambeau, Scottie Scheffler, Tony Finau and Harris English sitting out for the hosts.

"We had one other group that we were thinking about putting out, but it went so well this morning that I figured why mess things up and change things up at all," Stricker said. "We changed the order a little bit is all, but we kept the same pairings."

Can Europe produce a day two fightback at the 43rd Ryder Cup? Watch 'Live from the Ryder Cup' on Saturday from 11am on Sky Sports Ryder Cup ahead of live coverage of the Saturday foursomes from 1pm.