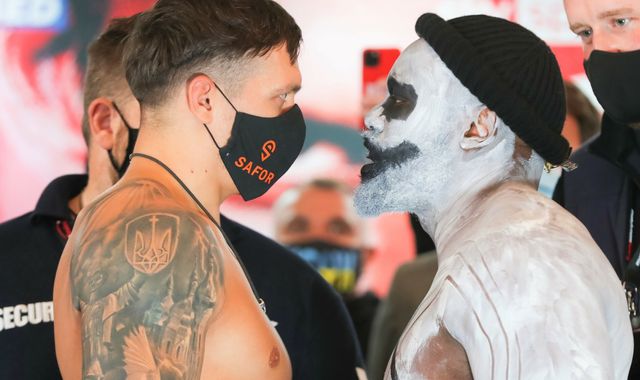 Derek Chisora wore Halloween face and body paint as he went head to head with Oleksandr Usyk, who was at his career heaviest for Saturday's fight.

The British heavyweight had 'War' daubed on his chest as he tipped the scales at 18st 3lbs, five pounds lighter than his last fight, while Usyk came in at 15st 7lbs, two pounds heavier than his debut in the top division.

Chisora then marched across the stage to confront Usyk, closely followed by security, and exchanged words with the Ukrainian star before they were eventually separated ahead of this weekend's fight, live on Sky Sports Box Office.

"Then he kept saying: 'War, war, war!'. That's exactly the shape I aimed for. It could have been a bit more, but it's still good.

"It's important to make a good statement on Saturday to avoid hesitation from my opponents in the future.

"Now people say they don't believe me, they don't trust me. On Saturday I will make my statement for the heavyweights."

Usyk, the former undisputed cruiserweight champion, has never been defeated as a professional, but Chisora insists he is targeting a destructive victory.

"I would rather him knock me out, than me do nothing," Chisora told Sky Sports.

"Either I will knock him out or he will quit on his stool. That's what we're going for."

Lee Selby shared an intense face-off with George Kambosos after they both weighed in at 9st 8lbs before a final eliminator for the IBF lightweight title.

Savannah Marshall was marginally heavier at 11st 5lbs for her WBO title fight against Hannah Rankin, who also made the middleweight mark, coming in at 11st 4lbs.

Tommy McCarthy and Bilal Laggoune both weighed the same on the scales, 14st 3lbs, ahead of their clash for the European cruiserweight title.

Ramla Ali makes her professional debut at super bantamweight on the Usyk-Chisora bill, and she weighed in at 8st 12lbs 12oz, while Eva Hubmeyer was 9st 2lbs.

Kash Farooq also resumes his exciting career, coming in at 8st 8lbs for a bantamweight bout with Martin Tecuapetla, who weighed in at 8st 10lbs.