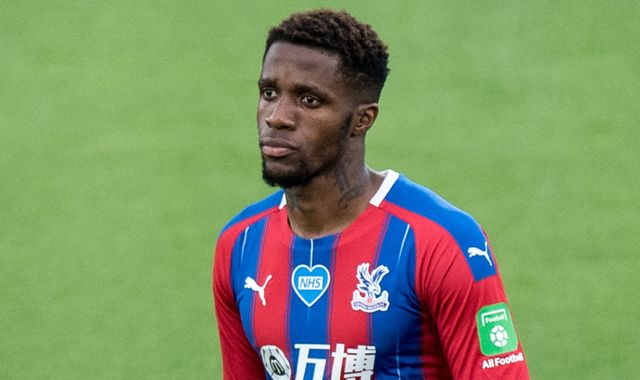 West Midlands Police have arrested a 12-year-old boy after racist messages were sent to Crystal Palace winger Wilfried Zaha ahead of Sunday's match against Aston Villa.

Zaha posted several screenshots of the racist abuse he had received to his social media accounts on the morning of the match, alongside the caption: "Woke up to this today."

West Midlands Police said after the game they have arrested a boy from Solihull in relation to the incident.

Palace manager Roy Hodgson supports Zaha's decision to go public about the abuse and says both clubs are working to identify the individual responsible.

"It is very saddening on the day of a game that a player wakes up to this cowardly and despicable abuse," said Hodgson.

"I think it is right that Wilf made people aware of it; I don't think it is something he should keep quiet about.

"I think it is very good that our club, Aston Villa and the Premier League are doing everything they can to find out who this despicable individual is and one can only hope that they will get identified and they will get called to account and they will pay for these actions.

"There is literally no excuse; there is no excuse at all."

A Premier League statement said: "This behaviour is completely unacceptable and the Premier League stands alongside @wilfriedzaha in opposing this, and discrimination in any form. There is #NoRoomForRacism, anywhere.

"We will continue to support players, managers, coaches and their family members who receive serious discriminatory online abuse.

"Through our dedicated reporting system we can take immediate action on cases like this."

Former England defender Sol Campbell saluted the mechanisms in place for people to be tracked down when they post online abuse.

Campbell told Sky Sports: "Sometimes these incidences happen and it's tough because do you want to speak out? Do you want to rock the boat? These things are hurting people.

"Zaha doesn't want to wake up to these images on his Instagram but it's good that authorities are there and mechanisms in place that you can track people down.

"If you give all the information away, to the right authorities they can track you down very easily. The conversation is out there, everybody is talking about it and that's key really. The main thing now is that people are listening now.

"And there are mechanisms, ways of finding and tracking people down now who are the perpetrators of these images or abuse online - keyboard warriors."