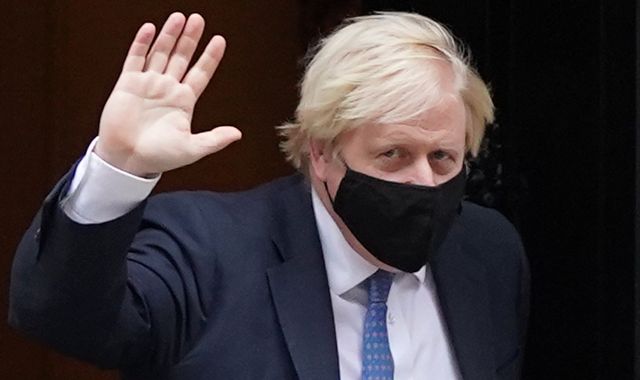 Senior figures in the 1922 Committee of backbench Conservative MPs have been seen entering Downing Street for a meeting with Boris Johnson.

Their talks in Number 10 come after a difficult few weeks for the PM that has seen unrest within his party on a scale not seen thus far in his premiership.

Sir Graham Brady, the committee's chairman, confirmed that its executive had met Mr Johnson, but declined to elaborate on what was talked about.

The meeting is understood to have been one of a number of regular gatherings that happen throughout the year, in which a number of issues are discussed.

They were seen smiling and laughing when they came out and posed for a group photograph on the steps of Number 10.

"Good to get back to normal with our termly meeting between the Executive of the 1922 Committee & our Prime Minister @BorisJohnson at No10," North West Durham MP Richard Holden tweeted.

Media reports have suggested that Conservative whips believe that some of the party's MPs have submitted letters of no confidence to Sir Graham, such is their unhappiness with Mr Johnson's performance.

The PM's handling of the Owen Paterson saga, which saw him instruct Tory MPs to vote in favour of a motion ignoring the Conservative's month-long Commons suspension for breaking lobbying rules and then later performing a U-turn after a backlash, angered many in his party.

There has also been disquiet about watered down announcements on HS2 and Northern Powerhouse Rail, as well as a change to social care reforms in England.

A speech to the CBI earlier this week - in which the PM lost his place, extolled the virtues of Peppa Pig World and made car engine noises - also raised eyebrows.

There have also been reports of tensions between the PM and Chancellor Rishi Sunak, as well as their respective operations in Number 10 and Number 11.

According to The Times, Mr Sunak is becoming increasingly frustrated with the "chaotic" operation next door in Number 10.

Its report said the chancellor's chief of staff, Liam Booth-Smith, was being blamed for an incendiary briefing earlier this week that there is "a lot of concern in the building" about Mr Johnson's performance.

But the PM's spokesman said the two teams "continue to work together very well at all levels".

Asked if Mr Johnson has confidence in Mr Booth-Smith, the spokesman said: "Of course, the prime minister has confidence in the team at No 11. They work very closely together delivering on the public's priorities."