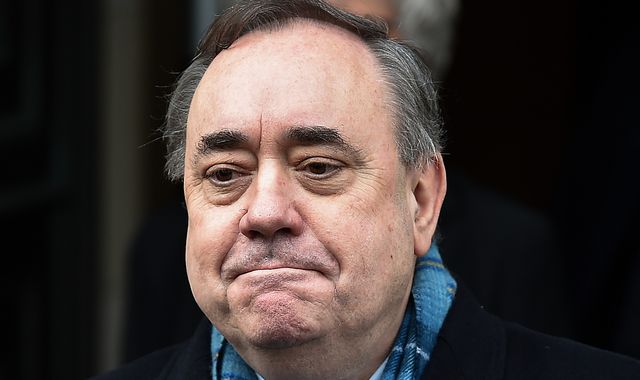 Scotland's former first minister, Alex Salmond, has accused officials in the Scottish government and the SNP of a "malicious and concerted effort" to damage his reputation - "even to the extent of having me imprisoned".

He alleges that Peter Murrell, the SNP chief executive and husband of Nicola Sturgeon, deployed senior figures to recruit and persuade staff members to submit police complaints against him.

Mr Murrell has previously denied conspiring against Mr Salmond. The SNP has called his latest claims "just more assertion without a shred of evidence".

Mr Salmond makes his claims in his final submissions to a Scottish parliamentary committee, which is looking into the Scottish government's mishandling of harassment complaints against him.

On the alleged effort to damage him, he claims that any supporting evidence establishing this point was not shared with the committee by Scotland's Crown Office. "Why?" he asks.

He claims that it was clear government special advisers were briefing the media on this information, before MSPs sitting on the committee had even seen it.

Mr Salmond criticises Scotland's Crown Office and states there has been a complete breakdown of the barriers between government, party and prosecuting authority.

He has made his final written submissions ahead of his Wednesday appearance as a witness before the Holyrood parliamentary committee, which is looking into the Scottish Government's mishandling of harassment complaints against him.

He alleges that Nicola Sturgeon, his successor as first minister and SNP party leader, breached the ministerial code several times. Breaching the code can be a resignation matter.

He states that she misled the Scottish parliament in giving an incorrect date for when she first found out about the complaints against him. Ms Sturgeon has repeatedly denied misleading parliament.

Alex Salmond also addresses the legal action - a judicial review - which he successfully launched against the Scottish government's investigation into the complaints against him.

He says the government's challenge cost the taxpayer more than £600,000 and alleges that its hope - shared by the SNP - had been that police action against him would prevent it from ever coming to court.

Mr Salmond states: "The real cost to the Scottish people runs into many millions of pounds and yet no one in this entire process has uttered the simple words which are necessary on occasions to renew and refresh democratic institutions: 'I resign.'

"The committee now has the opportunity to address that position."

Separately, Alex Salmond was acquitted of 13 charges of sexual assault against nine women at a criminal trial last year.

In responding to his latest claims, an SNP spokesperson said: "This is just more assertion without a shred of credible evidence.

"Several of the women have already made clear how utterly absurd it is to suggest they were part of a conspiracy to bring him down. And yet Alex Salmond is still making these ridiculous and baseless claims and lashing out at all and sundry.

"People who supported him loyally for years and worked tirelessly to get him elected don't deserve these smears. And women who made complaints about his behaviour - who barely merit a mention in his conspiracy dossier - most certainly deserve better."

Nicola Sturgeon is scheduled to be the last witness to give evidence to the Holyrood committee next week.

(c) Sky News 2021: Alex Salmond accuses officials in SNP and Scottish govt of 'concerted effort' to have him jailed