Northern Ireland: Emergency meeting to be held as violence resumes in Belfast - with a bus hijacked and set on fire 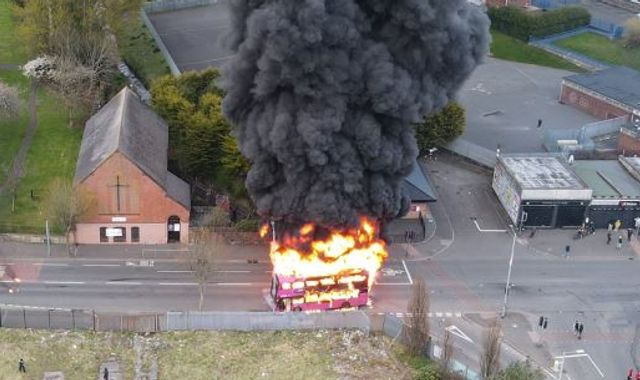 Violence has again resumed on the streets of Belfast ahead of an emergency meeting of the Northern Ireland Assembly, with a bus hijacked and set on fire and a photographer attacked.

The scenes on Wednesday evening followed several nights of unrest in loyalist communities amid tensions over the controversial Northern Ireland Protocol in the UK and EU's Brexit deal and the police's handling of alleged lockdown breaches by Sinn Fein at the funeral of republican Bobby Storey.

Police said the bus was pelted with petrol bombs at the junction of Lanark Way and Shankill Road in west Belfast, while stones were thrown at officers and a press photographer was assaulted nearby.

Crowds of up to 500 people gathered as the incident unfolded.

He tweeted: "I am deeply concerned by the scenes of violence in Northern Ireland, especially attacks on PSNI who are protecting the public and businesses, attacks on a bus driver and the assault of a journalist.

"The way to resolve differences is through dialogue, not violence or criminality."

The chief executive of bus company Translink said the driver had been "badly shaken" but was unhurt.

He said that all passengers had got off the bus when it was targeted and that all services in the area have been suspended until it is "safe" to reinstate them.

Ahead of Wednesday's violence, the Northern Ireland Assembly had already been recalled from recess after rioting in the city left more than 40 police officers injured.

It had not been due to return until 12 April.

First Minister Arlene Foster tweeted in response to a post by a journalist who said that they were attacked by two masked men.

"There is no justification for violence. It is wrong and should stop," she said.

Deputy First Minister Michelle O'Neill confirmed the meeting would take place on Thursday morning and condemned the "huge distress" being caused to the communities involved.

A 13-year-old boy was one of nine people arrested when trouble flared in loyalist parts of Greater Belfast and Londonderry earlier this week and over the weekend.

A decision not to prosecute anyone for alleged breaches of COVID regulations at an IRA funeral was the tipping point.

But tension has been simmering for months over the Brexit Protocol, establishing a trade border in the Irish Sea.

Front-line police officers are bearing the brunt of failures in politics and policing, according to a former deputy chief constable.

"This is not the fault of the front-line police officer. This is a failure of politics and I believe there are questions to be asked at the most senior level in policing about their ability to lead in a consistent manner and the only thing that should govern policing is the rule of law."

Many people expressed concern about the potential for republican violence if there was a hard border on the island of Ireland after Brexit.

Many of the young people engaged in the violence were not born at the time of the Good Friday Agreement in 1998.

But they are easily influenced by sinister elements within loyalism, a community feeling dangerously alienated.

Stacey Graham, a loyalist activist, says people are losing faith in the peace process because there has been no dividend.

She said: "This community has been left behind. We still have high levels of multiple deprivation, we’re still living in poverty, educational underachievement is a massive issue, we have really poor elemental health."

"People just feel really left behind and disconnected from mainstream politics," she added.

DUP councillor Dale Pankhurst understands the anger but wants young people to make the choice he did: politics, not violence.

He said: "People are hugely frustrated. They’re sick, sore and tired of this but there is a way to change it.

"If you engage, if you empower yourself, if you educate yourself, you then in turn empower and engage your community and that can make the real difference."

For all the hope of the Good Friday Agreement, conflict is never far from the surface.

Until both communities feel politics is working for them, there is little hope of reconciliation.

(c) Sky News 2021: Northern Ireland: Emergency meeting to be held as violence resumes in Belfast - with a bus hijacked and set on fire