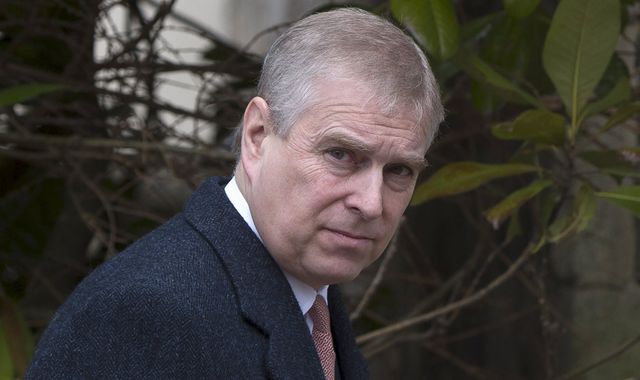 There are calls for Prince Andrew to lose his police protection and his dukedom while he awaits a civil trial accused of sexual assault.

After the Queen removed his military titles and royal patronages, the Labour MP for York Central, Rachael Maskell, tweeted that it was "untenable" for him to "cling on to his title another day longer".

Ms Maskell said: "This association with York must end. There's a very serious allegation made against this man of privilege and entitlement. I'm working with agencies to tackle sexual violence and misogyny."

Darryl Smalley, a senior member of City of York Council, also said the dukedom was no longer appropriate.

Given there is little chance of the Queen's second son returning to royal duties, Graham Smith, head of Republic, which campaigns for an elected head of state, said Andrew should pay for protection out of his own pocket.

Andrew is "no longer in any real sense a member of the royal household", Mr Smith said, and "lots of celebrities and other high-profile people pay for their own security".

Security minister Damian Hinds refused to confirm whether the duke will still receive taxpayer-funded security during a radio interview.

Prince Charles, who discussed the removal of his brother's privileges with the Queen and Prince William, refused to comment when approached by Sky News on Friday.

Visiting Haddo House and Country Park in the north east of Scotland to meet people who had helped clear up after Storm Arwen, Sky correspondent James Matthews asked him for his view on Andrew's position.

Andrew's position became more serious earlier this week when a judge rejected his attempt to have the sexual assault lawsuit against him thrown out.

His accuser, Virginia Giuffre, has thanked the judge and said she will "continue to expose the truth".

She tweeted: "My goal has always been to show that the rich and powerful are not above the law and must be held accountable."

He added: "His position is bad, he's reputationally done - particularly now the Royal Family have essentially pushed him into a locked and unheated turret in Balmoral.

"And the only thing he can do is throw himself on the grenade Judge Lewis A Kaplan threw into the family and take the hit for the wider family. That means we won't be talking about his trial rather the Queen's Platinum Jubilee."

The duke has strenuously denied the allegations against him.

A source close to him has said: "This is a marathon not a sprint and the duke will continue to defend himself against these claims."