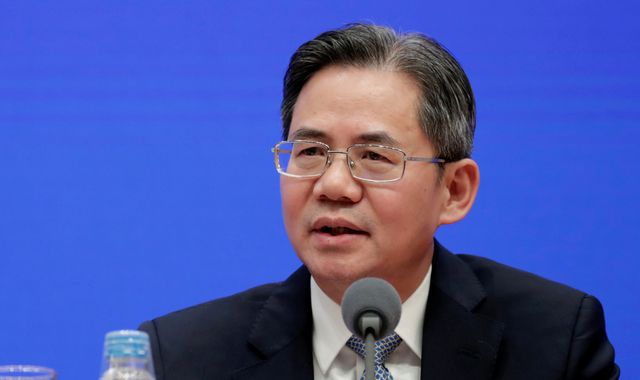 China's ambassador to the UK has been banned from parliament after a scheduled visit provoked anger among MPs and peers that have been sanctioned by Beijing.

Commons Speaker Sir Lindsay Hoyle, who took the decision in conjunction with his Lords counterpart Lord McFall, said it would not be "appropriate" for Zheng Zeguang to enter the estate for a talk on Wednesday while seven parliamentarians remain subject to sanctions.

"I do not feel it's appropriate for the ambassador for China to meet on the Commons estate and in our place of work when his country has imposed sanctions against some of our members," Sir Lindsay said.

He added: "If those sanctions were lifted, then of course this would not be an issue.

"I am not saying the meeting cannot go ahead - I am just saying it cannot take place here while those sanctions remain in place."

A spokeswoman for Lord McFall confirmed that the speakers of both houses "are in agreement that this particular APPG China meeting should take place elsewhere considering the current sanctions against members".

A number of the sanctioned parliamentarians said in a joint statement that they welcomed the decision.

"We the sanctioned welcome the strong principled stand made by the Speaker and Lord Speaker in standing up for freedom of speech in the mother of parliaments by supporting those parliamentarians who have been sanctioned by China," they said.

But Richard Graham, the Conservative MP who chairs the all-party parliamentary group (APPG) on China and organised the talk, expressed his "regret" at the development.

"I regret this long arranged event has now been postponed because the best way to discuss issues is to engage," he said.

"This decision is of course the Speaker's prerogative and we will make new arrangements."

And the Chinese embassy said it was a "despicable and cowardly" move that will harm British interests.

A spokesman said: "The despicable and cowardly action of certain individuals of the UK parliament to obstruct normal exchanges and cooperation between China and the UK for personal political gains is against the wishes and harmful to the interests of the peoples of both countries."

China introduced sanctions on seven parliamentarians back in March, all of whom have been vocal critics of Beijing and have spoken out against the treatment of the Uighur people in Xinjiang.

Beijing's move came shortly after Britain, the US, Canada and the European Union imposed sanctions on Chinese officials deemed to be responsible for human rights abuses in the territory.