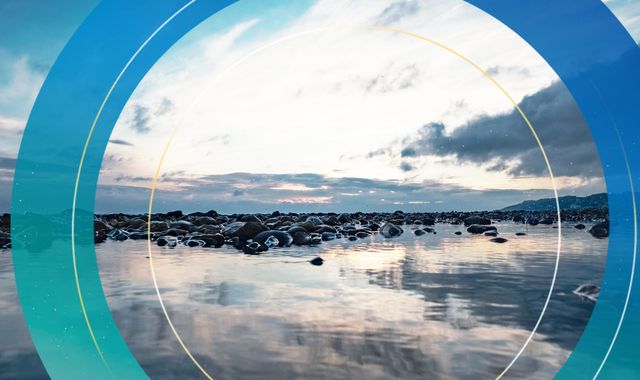 Restoring the seas around Britain is as important to achieving net zero carbon emissions as reforesting, campaigners have said.

Around 205 million tonnes of carbon are stored in the UK's coastal waters, 50 million more than is held in all of the country's standing forests, according to a report by the Marine Conservation Society (MCS) and Rewilding Britain.

The study, Blue Carbon - Ocean-Based Solutions To Fight The Climate Crisis, says restoring seagrass, saltmarsh, oyster reefs and kelp forests to Britain's coastal waters, which cover 500,000 km2 (193,000 miles2) in all, would be a huge boost towards meeting carbon-cutting goals.

The latest news on climate change and the environment

Roughly 43,000 tonnes of carbon is drawn down into the saltmarsh and seagrass habitat of the British Isles, the report said, a rate of between two and four times that of tropical forests.

Even in their current depleted state, the UK's existing stock of saltmarshes and seagrass beds have the carbon storage potential of between 1,000 and 2,000 km2 (386 miles2 and 772 miles2) of tropical forests, the research found.

Globally, saltmarsh and seagrass beds can store up to 450 million tonnes of CO2 a year - almost half the emissions of the world's entire transport sector.

:: Subscribe to ClimateCast on Spotify, Apple Podcasts, or Spreaker.

Ministers should develop an "ocean charter" to implement nature recovery plans including the establishment of low-carbon fisheries and aquaculture, such as the development of shellfish reefs, the MCS and Rewilding Britain have argued.

In addition, they're demanding fisheries-related carbon emissions be halved by 2030.

Ministers have committed to planting 11 million trees by 2022, but now the MCS wants to see similar commitments to the ocean and wetlands.

By 2019, 21.8 million hectares of UK waters had some degree of environmental protection, according to the Office for National Statistics.

But the two organisations accuse these of being "paper parks" with little or no enforcement banning the most damaging activities.

Dr Chris Tuckett, MCS Director of Programmes, said: "Carbon contained in marine and coastal ecosystems must be considered in the same way as our woodlands and peatbog - critical to the UK's carbon strategy."

Rewilding Britain Chief Executive, Rebecca Wrigley, said: "We're calling for the rewilding and protection of at least 30% of Britain's seas by 2030."