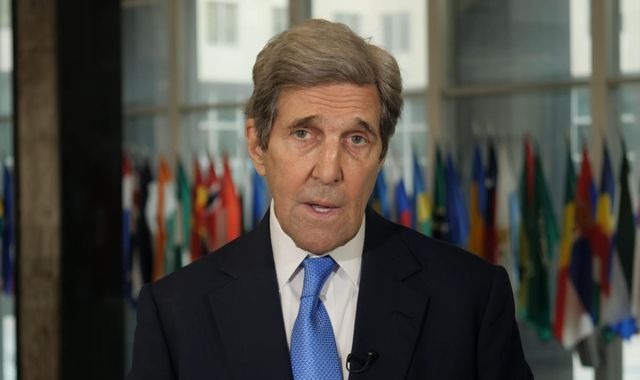 John Kerry has told Sky News the world faces "catastrophic" global warming unless leaders do more to combat the problem.

The US climate envoy told Sky's Sophie Ridge the problem is "extremely urgent" and that "countries are simply not getting the job done".

It comes as the US and China agreed to co-operate on the climate crisis following two days of talks in Shanghai.

The former US secretary of state said: "It's extremely urgent, the word urgent is totally applicable to the current crisis that we are in because countries are simply not getting the job done.

"Even if we did everything that we set out to do in the Paris Agreement the Earth's temperature is going to increase a very significant amount, perhaps as much as 3.7C or more.

"The reason for the real urgency now is because we are not getting the job done.

"What we said we would do in Paris it's actually heading towards 4C or more - that's beyond catastrophic in the consequences in the food production, in water, in habitability in various parts of the planet, the melting of ice, the sea level rise, the warming."

The agreement was made following a meeting between Chinese climate envoy Xie Zhenhua and Mr Kerry in Shanghai on Thursday and Friday.

A joint statement said: "The United States and China are committed to cooperating with each other and with other countries to tackle the climate crisis, which must be addressed with the seriousness and urgency that it demands."

The two countries will continue to discuss "concrete actions in the 2020s to reduce emissions aimed at keeping the Paris Agreement-aligned temperature limit within reach."

The Paris Agreement is a legally binding international treaty, adopted by 197 countries at a summit in the French capital, which has a goal of limiting global warming to well below 2C, and preferably 1.5C, compared to pre-industrial levels.

The statement added that the two countries will discuss specific emission reduction actions including energy storage, carbon capture and hydrogen.

And they said they would take action to maximise financing for developing countries to switch to low-carbon energy sources.

Separately, UK climate change tsar Alok Sharma is heading to Japan to shore up support ahead of Thursday's Leaders Summit on Climate, hosted by US President Joe Biden.

The UK, which is hosting the major COP26 climate summit in Glasgow in November, was "using all international avenues" to ask every nation to set ambitious emission-reducing targets in order to reach net zero carbon output by the middle of the century, Number 10 said.

Mr Sharma said: "The US Leaders Summit on Climate is a major event in this vital year for climate action on the road to COP26 in Glasgow.

"The climate crisis is the greatest challenge that we face and it is our duty to address it.

"There are also great opportunities as we look to build back greener [after the coronavirus pandemic] - accelerating our move to a greener future, as we invest in new technologies and create millions of new jobs across the world.

"We are making progress but we are not there yet - there is much more work to be done.

"We need to turn ambition into action and coming together this week we are looking to raise global climate ambition, continue the momentum we have already seen and ensure we keep 1.5 degrees in reach."

To stand any chance of achieving the 1.5C limit carbon emissions need to reach net zero by 2050.

A range of major carbon-producing countries, including the US, the UK, Japan and the EU, have signed up to the idea alongside China, who have committed to reaching it by 2060.

Officials said 80 countries had made net zero commitments, covering 65% of global carbon emissions - more than triple from when the UK took over the COP presidency in December 2019.