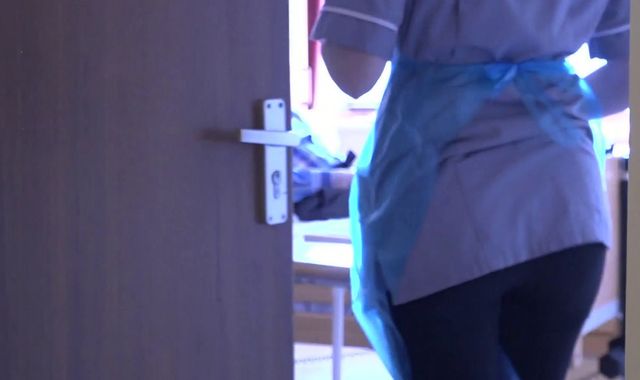 Care home staff in coronavirus hotspots are waiting over a week for test results, prompting concerns that the system cannot cope with increased demand.

In some cases, staff in the North West of the country - where the virus is spreading more rapidly - are waiting so long that they are being re-tested before the last result has been delivered.

Care home workers must now be tested every week under a new scheme launched by the government to stop the spread of the virus among older people.

But Sky News has spoken to a number of homes in hotspot areas which are experiencing long delays for test results for both staff and residents.

In one case in the North West, residents waited 10 days before receiving an "inconclusive" result. This meant all residents had to be re-tested.

Care home managers have warned that staff are losing faith in the testing system, which is under pressure after it emerged those with symptoms around the country are also struggling to get tested.

Sky News has also discovered evidence of testing centres telling those who are unable to book an appointment in their local area to book a test in a different location and turn up anyway.

The unique code generated by the system allows someone to be tested at a different site to the one they have booked.

One family, who asked to remain anonymous, said: "Our son developed symptoms and we had been advised by the NHS helpline to book a test online.

"After spending 24 hours unsuccessfully trying to book a test, a friend of mine called me to say that they had stopped at our local drive in centre and it had been explained to them that we could book an appointment anywhere in the country and use the QR code from that booking at our local centre.

"The people at the test centre had inferred that this wasn't being widely advertised but that it would be fine. So that's what we did.

"We managed to eventually find a test slot available within the hour that day 300 miles away in Newcastle. We took the QR code from that booking down to our local test centre and got the test. Still awaiting the result so fingers crossed."

There are also examples of the same thing happening in Oxford and two other areas of England.

Speaking in the House of Commons today, Matt Hancock acknowledged that the testing system is under pressure because of increased demand but called on people not to "game the system".

He added: "We have seen a sharp rise in people coming forward for a test, including those who are not eligible.

"As demand has risen, so we are having to prioritise once again and I do not shirk from decisions about prioritisation. They are not always comfortable, but they are important."

Laboratories which process the results are also under strain and a leaked document published by the Sunday Times this weekend showed those in Manchester are under the most pressure with thousands of backlogged tests.

A Department of Health spokesperson said more than 100,000 tests are being sent to care homes every day, while the system is processing around 200,000 samples per day according to the latest figures.

However there is spare capacity which is not being used because labs are unable to process the tests quickly enough.

The online portal to book a test is paused when demand is too high, a government source said, leading people to find no tests are available in their area.

A spokesperson said more tests are made available throughout each day.

A Department of Health and Social Care spokesperson said: "From the start of the pandemic we have been doing everything we can to ensure care home residents and staff are protected, including testing all residents and staff, providing 208 million items of PPE, ring-fencing £600m to prevent infections in care homes and making a further £3.7bn available to councils to address pressures caused by the pandemic - including in adult social care.

"Our capacity is the highest it has ever been and while we are seeing a significant demand for tests - we are ensuring that 100,000 tests per day are sent to care homes.

"Our laboratories continue to turn test results around as quickly as possible and we plan to rapidly expand it in the coming weeks, as well as bringing in new technology to process tests faster.

"We are aware a number of tests have been voided and are working with care homes to ensure residents and staff receive replacement tests as quickly as possible."