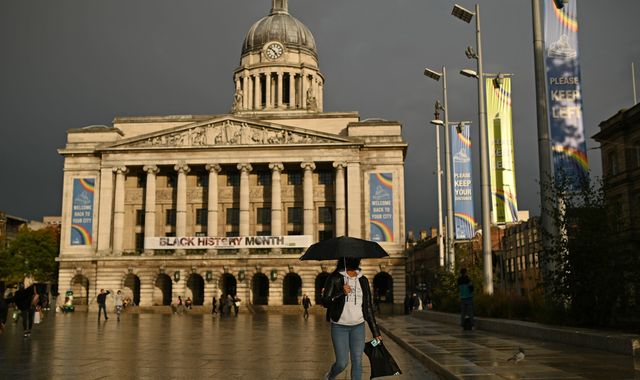 There has been a sharp increase in coronavirus cases in the East Midlands over the past two weeks, according to the latest weekly surveillance report from Public Health England (PHE).

It follows warnings from chief scientific adviser Sir Patrick Vallance that cases are rising across England - and not just in the North West and North East.

PHE said there have been "notable increases in incidence and positivity" in the East Midlands in the two weeks from 28 September to 11 October.

During this period, the percentage of people receiving a positive result after taking a COVID-19 test has risen from 2.8% to 8.9%.

Nottingham continues to have the highest rate of new cases in England, reporting around 3,070 new cases in the seven days to 11 October - equating to 922.2 cases per 100,000 people.

It is believed the uptick in cases is at least partially linked to a large outbreak at the University of Nottingham.

There are currently over 1,000 active coronavirus cases at the university, according to the latest data.

The city has been moved to Tier 2 restrictions, meaning that different households are not allowed to meet indoors - although it has so far avoided the toughest restrictions.

A meeting between Nottingham MPs and government ministers - which some believed was to discuss moving into Tier 3 - was cancelled on Friday, Nottinghamshire Live reported.

While infections in the capital appear relatively low compared to regions in the North, the highest hospital admission rates have been seen in London and the North West.

This could be due to a drop in testing in the capital, meaning that infections are likely much higher than the available data suggests.

Mayor Sadiq Khan has repeatedly criticised the testing system, saying: "We need an immediate increase in testing capacity so that London's testing rates can increase to the national average."

Meanwhile, schools and universities are still accounting for the highest proportion of reported coronavirus outbreaks across the UK.

In the week up to 11 October, 336 suspected outbreaks were reported to PHE by educational settings in the UK.

In 279 cases, at least one person tested positive for COVID-19.

Care homes accounted for the second highest number of suspected outbreaks, with 321 reports. At least one person tested positive for COVID-19 in 214 cases.