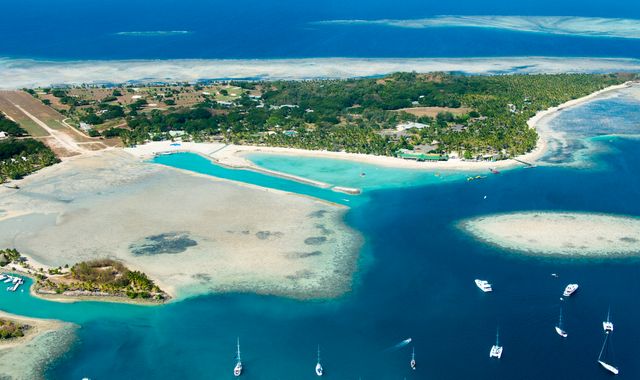 Fiji's prime minister is urging billionaires to return to his country's shores for the first time since lockdown.

Frank Bainimarama has called for the super rich to come back to the archipelago nation three months after it closed its borders.

On 25 March, its main airport in Nadi was shut six days after a cabin crew worker tested positive for COVID-19.

A strict 8am to 5pm curfew was then imposed, with the military and police patrolling the streets to make sure citizens stuck to the new laws.

Now the South Pacific country is eager to get back on its feet and see the return of tourists.

But Mr Bainimarama said visitors must be clear of COVID-19 before flying out, and have to quarantine or spend time docked in its waters for 14 days before stepping foot on an island.

In a tweet, he said: "So, say you're a billionaire looking to fly your own jet, rent your own island, and invest millions of dollars in Fiji in the process - if you've taken all the necessary health precautions and borne all associated costs, you may have a new home to escape the pandemic in paradise."

Around 40% of Fiji's GDP is generated by international tourism.

The country's attorney general, Aiyaz Sayed-Khaiyum, told the Observer around 30 "high-net-worth individuals… from a very well-known company" were due to arrive soon.

"From our perspective, this is a balance between managing our health risk and also opening up the economic pathways. It's critically important to do that."

He did not reveal where the tourists were flying from or which company they were from.

They could serve their 14-day quarantine period on board their private boats prior before docking in Fiji, said Mr Sayed-Khaiyum.

Fiji - which has a population of more than 833,000 across its 300 islands - has managed to keep the infection rate of the virus extremely low.

It has reported just 18 cases and no deaths.

Saturday 27 June marked the country's 100th day since its first case was reported and 70 days since its last new recorded case.