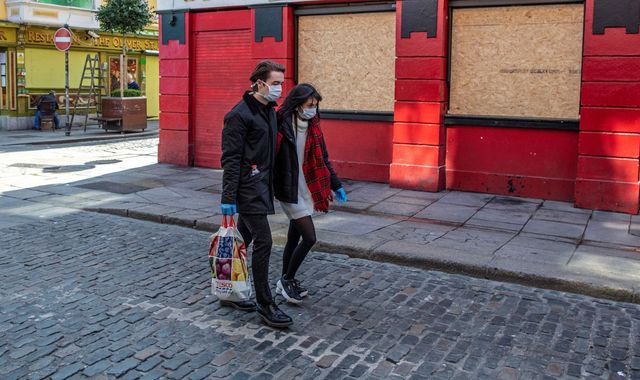 The Irish government has announced pubs that do not serve food will remain closed until 10 August.

The country's four-phase recovery plan had originally foreseen pubs opening next Monday (20 July), but the final phase will now be postponed for three weeks.

Currently, only pubs that serve a "substantial meal" - valued at a minimum of €9 (£8) - are open for business, and customers can only stay on the premises for a total of 105 minutes.

Announcing the measures, Irish Prime Minister Micheal Martin said the virus "hasn't changed, and remains as indiscriminate in its cruelty as when it arrived".

He said the coronavirus was as relentless as ever in seeking out a host.

The move came as the number of cases among young people rose.

Ireland still has a relatively low number of recorded coronavirus cases, with two deaths and 14 new cases notified to the Department of Health on Wednesday.

Despite the low figures, concerns persisted about the potential for a spike in numbers if the full reopening of pubs went ahead on Monday.

Dr Ronan Glynn, Ireland's acting chief medical office, said: "We are at a sensitive stage in the pandemic - this requires caution and collective effort to hold firm and keep the virus suppressed in the community."

The Vintners Federation of Ireland, which represents mostly rural pubs, said publicans were stunned by the move.

VFI chief executive Padraig Cribben said: "This is a shocking decision not to proceed with the planned reopening of pubs and will be a hammer blow to thousands of pubs and their local communities around the country.

"The vast majority of these pubs are small rural outlets run by families who are on first-name terms with their customers and far removed from the crowded venues that concern [health authorities]."

He announced an increase in compliance staff at Irish airports to make incoming passengers aware of the advice to quarantine for 14 days, but the government has not made that legally enforceable.