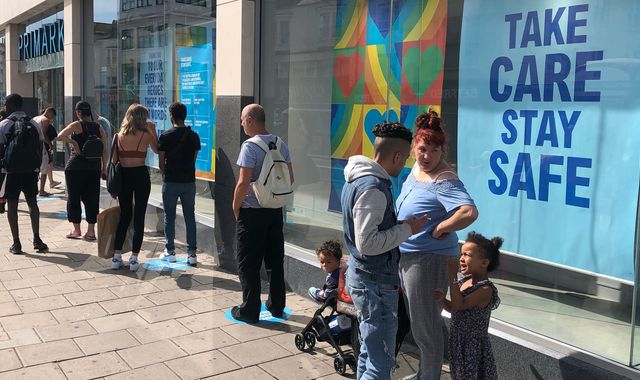 The rate of inflation rose unexpectedly in June because the coronavirus crisis delayed the usual summer sales season at fashion retailers, according to official figures.

The Office for National Statistics (ONS) charted an increase in the annual rate to 0.6% last month from 0.5% in May.

Economists had forecast that the rate would fall to 0.4% - further easing pressure on family budgets as households battle the consequences of the COVID-19 pandemic including job losses and wage hits.

The ONS said an easing of food prices was offset by rising costs for video games and clothing.

Its deputy national statistician, Jonathan Athow, said: "The inflation rate has increased for the first time this year, but remains low by historical standards.

"Due to the impact of the coronavirus, clothing prices have not followed the usual seasonal pattern this year, with the normal falls due to the start of the summer sales failing to materialise."

That came at a time when the lockdown prevented the opening of physical fashion stores - with only those in England granted permission to welcome back customers from the middle of June.

The figures showed a 1.8% price surge for games, toys and hobbies as availability issues within the lockdown forced costs up.

The ONS said the main contributor to rising inflation from clothing and footwear costs came from across men's ranges - with a "mixed" picture for women's fashion.

Economists noted the relatively small increase in inflation with little alarm as the effects of the lockdown push the country towards, what is tipped by official forecasters to be, the sharpest recession for 300 years.

Separate figures released on Tuesday by the ONS suggested the economy remained a quarter smaller in May than its pre-crisis level in February.

Debapratim De, a senior economist at Deloitte, said of the latest data: "June's inflation figures are slightly above expectations but there remains abundant spare capacity in the economy.

"This should maintain a downward pressure on inflation, which could fall further, especially if there is a spike in unemployment later this year.

"A deflationary environment and elevated uncertainty means interest rates are likely to remain at ultra-low levels well into next year."