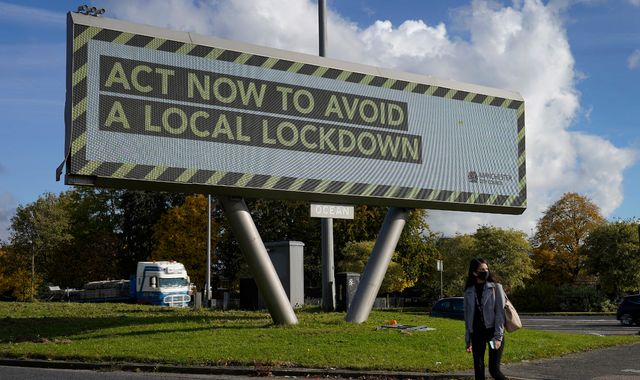 Greater Manchester residents will have Tier 3 coronavirus restrictions imposed on them even if local leaders do not agree, Boris Johnson has warned.

Speaking at a news conference from Downing Street, flanked by chief scientific adviser Sir Patrick Vallance, and government medical adviser Dr Susan Hopkins, the prime minister said: "If agreement cannot be reached, I will need to intervene in order to protect Manchester's hospitals and save the lives of Manchester residents."

He added the situation there was "grave" and "worsens with each passing day", and that action was needed to avoid more people going into intensive care and dying.

It comes as Lancashire prepares to follow the Liverpool City Region into Tier 3 - the highest level of COVID-19 restrictions in England - from midnight tonight.

Manchester's leaders have been resisting following suit until a stronger support package to protect workers and businesses is pledged by the government.

In a rebuttal to the prime minister's remarks, Greater Manchester mayor Andy Burnham and council leaders from across the region said they "do not believe that the current proposals provide adequate support".

"At our last meeting with Downing Street officials yesterday morning, we were told they would arrange a further meeting later in the day to provide a response to our requests," they said in a joint statement.

"That did not happen and, despite being on standby all day today, we are still waiting for it to be arranged. We can assure the prime minister that we are ready to meet at any time to try to agree a way forward."

Talks have been going on for several days but no agreement has yet been reached, after acrimony broke out on Thursday.

In a plea to Mr Burnham at the news conference, Mr Johnson asked him to "reconsider and engage constructively" as "time is of the essence".

And asked when asked by Sky's deputy political editor Sam Coates if people would die as a result of the row between Downing Street and Manchester leaders, he said: "These are horrendously difficult decisions and there are harms on both sides, as it's been pointed out previously.

The number of people in intensive care beds in Greater Manchester is already 40% over what it was during the first peak in spring and the case rate has risen to 224 per 100,000 among the over 60s, the prime minister said.

"The national government must reserve the right to step in and do what is necessary," Mr Johnson added.

He also laid out plans to distribute and trial rapid testing to "help stop the virus' vicious spread".

Meanwhile, the R rate - the average number of people someone with coronavirus passes it on to - has risen slightly from between 1.2-1.5 to 1.3-1.5 this week.

SAGE, the government's group of scientific advisers, said the estimate was "reliable" and there is "still widespread growth of the epidemic across the country".